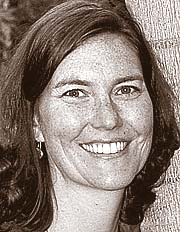 Emily Jane Fleming, of Yellow Springs, was given rest and peace in the early hours of Friday, March 7, following a courageous and heroic battle with breast cancer. She was 38.

Emily was born in San Diego, Calif., on March 21, 1975, the daughter of Jim and Barbara Marsh. When she was eight years old, Emily began competing in synchronized swimming. She attended Monte Vista High School in Spring Valley, Calif., where she graduated as valedictorian. She accepted a scholarship to The Ohio State University for synchronized swimming and graduated with honors in microbiology. She led her teams to four consecutive national championships and was later inducted into the Ohio State Athletic Hall of Fame. She was a ten-year member of the U.S. National Synchronized Swim team where she competed in many international competitions. Her numerous achievements were recognized by being inducted into the U.S. Synchronized Swimming Hall of Fame.

In 2000, Emily met her future husband, Scott, in Berkeley, Calif. They returned to Yellow Springs, where they shared their love for travel, food and dogs. Emily earned her master’s degree in food science from Ohio State in 2004. She began her career as a microbiologist at Battelle Memorial Institute and continued her career for the Air Force Research Laboratory at Wright-Patterson Air Force Base.

Emily and Scott married in July of 2006 and their son, Bryce, was born in 2009. Her diagnosis with breast cancer came during her pregnancy. An extremely dedicated team of doctors, nurses and health care professionals from The Ohio State University Stephanie Spielman Comprehensive Breast Center cared for Emily and her family throughout her treatments.

She participated in three Pelotonia bike rides to raise funds for cancer research at Ohio State, which was a huge inspiration for her physical and mental health. In January of 2012, after learning of her cancer metastasis, Emily joined the Noble Circle Project, a cancer support group for women that inspired her to thrive on a daily basis.

Emily is survived by numerous family and friends, including her parents, of San Diego, Calif.; husband, Scott M. Fleming, and son, Bryce M. Fleming, both of Yellow Springs; and brother Jimmy Marsh and sister Lauren Marsh, both of San Diego. A service celebrating Emily’s life will be held on Saturday, March 15, at 1 p.m., at the Yellow Springs United Methodist Church, with the Rev. Sherri Blackwell officiating. Pink attire is encouraged!

After the service, attendees are welcome to join the family for a short hike in Glen Helen Nature Preserve. A celebration of Emily’s life, including “good food!” will be held at 5 p.m. at the Fleming home in Yellow Springs. In lieu of flowers, memorial contributions may be made to the Noble Circle Project (www.noblecircle.org) or The Ohio State University Comprehensive Cancer Center (www.cancer.osu.edu). Condolences may be expressed to the family at http://www.littletonandrue.com