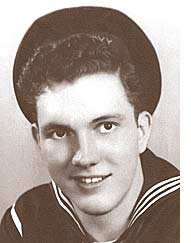 Known to family and friends as Dick, he was born in Springfield on Feb. 25, 1929, to Robert Quincy Harwood and Ann Elizabeth (Howel) Harwood. He attended Springfield schools, and at just 16 years of age, he joined the U.S. Merchant Marines. Not long after, Dick joined the U.S. Navy, where he served as a Seaman First Class from Feb. 27, 1946, to Dec. 24, 1947. He was stationed aboard the USS Randolph, one of 24 Essex-class aircraft carriers built during World War II.

While in the Navy, Dick learned to bake. This became his career — and his passion. Upon his discharge from the service and using the GI Bill, he attended the prestigious Wilton School of Cake Decorating and Confectionary Art in Chicago. He used to say that he went there because he wanted to learn how chocolate-covered cherries were made! At the Wilton School, Dick learned many of the skills he would eventually utilize in his own bakery business. Around the time he returned home to Ohio after his time at sea, a group of Yellow Springs locals — Dr. Martin Cook, Mary Porter and Walter Anderson — started a deli in town in what is the current location of The Winds Winery on Xenia Avenue. They needed a baker, and Dick Harwood was their man!

Dick worked there for several years, eventually buying the deli and turning it into The Village Bakery— a Yellow Springs institution. He later moved the business down the street a few blocks to what is now the location of the Dunphy Real Estate office. The Village Bakery defined the term “scratch bakery,” where everything is homemade and everything is fresh. The business was really the center of life at night in Yellow Springs. Many people in town, especially students at Antioch College, would frequently be found outside the bakery around 11:30 p.m., waiting for the first batch of Dick’s hot, fresh doughnuts. Nothing tasted better. Dick called it an “oasis in the night” — and it was!

Dick was amazingly skilled. His hands would move at lightning speed as he rolled out and cut dough into pastries. His standards were high. He knew quality, and produced nothing but quality. From doughnuts and elephant ears to finely decorated wedding cakes — whatever Dick baked, it was the best.

After 17 years of continual operation, Dick closed The Village Bakery. He went on to work at Fulmer Supermaket in Xenia as a bakery manager and later for SuperValu as a bakery representative. He retired in 1988, due to back problems, but he always missed the work. Dick was proud of the business he built. He worked tirelessly — long, back-breaking hours of labor.

Baking wasn’t Dick’s only passion. Clara McNutt used to work for Dick in the bakery. Her daughter, Polly, was married to Jerry DeWine. One day, Clara told Dick that it was time for him to settle down, and she had just the right girl for him. And that girl was Jerry’s sister, Elizabeth (“Mickey”) DeWine. Dick took Mickey out on their first date in January 1961, and by September, they were married.

Dick and Mickey made their home in Xenia, where they lived for 40 years. They shared many wonderful adventures during their years together, and in September 2011, they celebrated their 50th wedding anniversary. For over five decades, they loved each other, and they took care of each other. Dick was a wonderful husband. He was also a wonderful father and grandfather. He loved spending time with his daughter, Rhonda, his granddaughter, Tiffany, and his great-granddaughter, Tiana. He was grateful for each one of them.

The Harwood family spent many hours together traveling to antique shows across Ohio, digging through dirty boxes to find treasured antique license plates. Dick collected them and was determined to find one from all 50 states — and he did! He neatly and proudly displayed each of them in his garage. Dick also enjoyed going to classic car shows with his family. He had a 1935 Ford that he helped restore. He loved that car. He would frequently drive it in parades and also to and from work every day. He taught both Rhonda and Tiffany how to drive in it. It had a one-blade windshield wiper, and if you were the passenger when it was raining, you got to help manually wipe that windshield!

Dick was a strong man. He was a great swimmer and boxer. He boxed in the Golden Gloves, once even sparring with Springfield native Davey Moore, who won the World Featherweight Title in 1959. Dick also had a soft side: he deeply loved animals. Squirrels and raccoons would come right up to him, and he would feed them right from his hand. He was rarely without a pet, having had a goat as a kid and later many dogs, including Bassett hounds and a blood hound. He loved them all, and especially adored his last dog, Lucy. Dick also loved his last pet: a mischievous, fanged cat named Cole.

Dick enjoyed traveling with his family, whether it was their first vacation to St. Louis or to visit Gatlinburg and the Great Smokey Mountains or to travel to Florida, as they did nearly every summer. When Dick worked for SuperValu, he traveled a lot, and would always bring a t-shirt back from wherever he was for granddaughter Tiffany. They had a special bond. Dick loved to take Tiffany fishing in Florida -— even if they didn’t catch any fish. He taught her how to bake, and they loved to laugh together, as he would try to reduce large bakery-sized batch recipes down to smaller ones.

Dick had a great sense of humor. He loved to tell jokes and play practical jokes. Years ago, there was a man who worked for Dick at the bakery. He would take his shoes off at the front door so they wouldn’t get covered with sugar glaze. When he finished for the day, he went to the front door and slipped his feet into his shoes. But, Dick had nailed them to the floor! He loved to laugh, and he loved to make people laugh. Dick shared laughs with many, especially with three dear friends who served on the USS Randolph. After his service in the Navy until he died, Dick remained close with Jerre Groff, from Lancaster, Pa., who served on the ship with him; John Crowell, from Ocean Springs, Miss.; and Tim Colvard, from Fort Payne, Ala. They were special friends.

Dick’s health started declining in 2006. Though his eyesight deteriorated and his mobility diminished, he never gave up and never complained. He was always appreciative of those who helped him. His spirit remained bright and his sense of humor intact.

Dick Harwood was a fine man -— gracious, kind-hearted, fun-loving, generous and loyal. He will be deeply missed, but always remembered. Dick is preceded in death by his parents; his brother-in-law and sister-in-law Dick and Jean DeWine; and his brother-in-law Jerry DeWine. He is survived by his wife, Mickey; daughter, Rhonda (Roger) Burba; granddaughter, Tiffany Burba; great-granddaughter, Tiana Douglas; sisters Nadine (Lewis) Richards and Connie Harris; brothers James (Sharon) Harwood and Gary (Sharon) Harwood; sister-in-law Polly DeWine; Mickey’s nephew Mike (Fran) DeWine and their children; three cousins; and several nieces and nephews. Dick’s family would like to thank the staff on the skilled nursing wing at Villa Springfield for being so kind to Dick and for their compassionate care. They would also like to thank Jeanie Pollack, who helped care for Dick for many years. He adored her.

The family will hold a private burial at Clifton Union cemetery. In lieu of flowers, donations in his memory may be sent to the Clark County Humane Society, 5201 Urbana Road, Springfield, OH 45502. Condolences may be expressed at http://www.littletonandrue.com