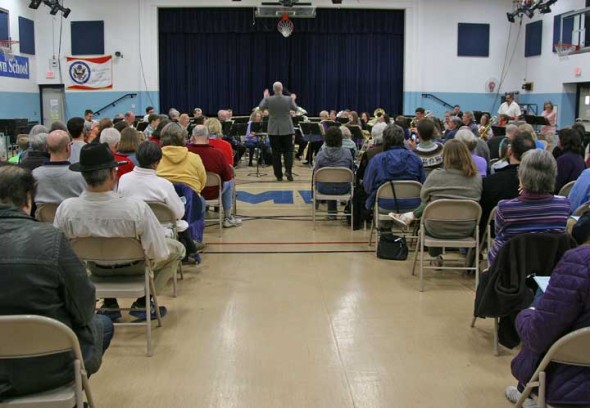 Dennis Farmer directs the Yellow Springs Community Band while local supporters listen during their first concert of the year. (photos by Suzanne Szempruch)

The Yellow Springs Community Band, which was founded in 1993, performed their first concert of the year on Sunday, March 9, in Mills Lawn Gym. About 75 people came to listen as Cammy Grote, Dennis Farmer and Brian Mayer each conducted songs during the hour long concert. All three conductors also play in the band, with Grote and Farmer on trombone and Mayer on tuba. Listen below for a short medley of selections from the evening’s performance.

The village’s intergenerational band is 51 members strong, and will be performing locally again on July 4th before the fireworks. Follow them at http://www.facebook.com/ys.CommunityBand .