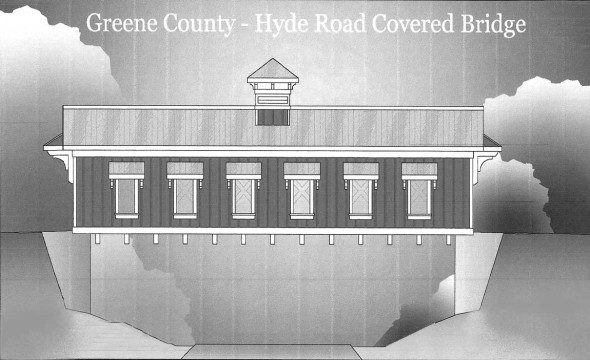 A rendering of the new Hyde Road covered bridge currently under construction, as seen from the bike path. Completion is scheduled for beginning of June. (Elevation plan courtesy of Greene County Engineering)

The wooden bridge that was taken out early last year at Hyde Road where it meets Corry Street will be replaced this spring by a covered bridge. Construction is currently in full swing and is expected to be done around June 1, Greene County Deputy Engineer Luke Trubee said this week.

According to a story “Cherishing Covered Bridges” published on the Travel Channel website in 2011, covered bridges became popular in North America during the 19th century to protect the wooden structure from the elements and to calm horses that were spooked by the water rushing below. According to the story, Ohio had 2,000 covered bridges, more than any other state in the 1800s. Though the construction of covered bridges was replaced by iron bridges starting in the 1860s, the estimated 125 covered bridges that survive in the state are about to be increased by one. (The Hyde Road bridge was never previously covered.)

According to Trubee, the Hyde Road bridge is Greene County’s main project this year. Construction was bid at $485,000, half of which will be covered by an Ohio Public Works Commission grant. The decision to cover the bridge was largely aesthetic, Trubee said, adding that the Yellow Springs location and the landscape with the bike path running below the bridge “made it a good spot for a covered bridge.”

The bridge will be constructed with a Howe truss with glue laminated timbers and a wood deck with a paved surface for skid resistance. The covering will be made with wood siding, windows and a metal roof. The bridge will have a load limit of 80,000 pounds, the current standard for a single lane bridge. The limit will accommodate fire and other emergency vehicle access.