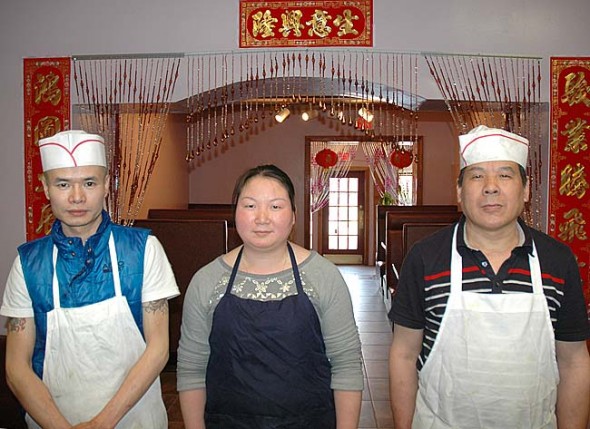 Earlier this month, from right, Ken Yang and Lixia Gao, and Lixia’s father Zhi You Gao opened Lucky Dragon serving Chinese fare on Dayton Street, the former location of Chen’s Asian Bistro. The restaurant opens daily at 11 a.m., (noon on Sundays) and closes between 10:30 and 11 p.m. (Photo by Lauren Heaton)

When Zhi You Gao and his son-in-law, Ken Yang, worked as chefs in Fujian Province on the southeast coast of China, they cooked in the Min style using ingredients such as crab, abalone, mountain mushrooms and fresh bamboo shoots. But when they came to the U.S. via New York City 13 years ago, they learned the art of Chinese American cooking, including favorites such as General Tso’s chicken, Szechuan beef and moo goo gai pan. The dishes are featured on the menu of the new restaurant the family opened in Yellow Springs earlier this month.

Lucky Dragon, is named after its sister restaurant, Double Dragon in Cedarville, opens daily at 11 a.m., (noon on Sundays) and closes at 10:30 p.m. every day but Friday and Saturday, when they stay open until 11 p.m. The restaurant is located at 126 Dayton St., the site of the former Chen’s Asian Bistro.

Yang’s wife, Lixia Gao, spoke English with the help of a cousin, Angela Yang, who is visiting from New York to help with the opening. The family moved from New York to the Dayton area because they were looking for a more peaceful, slower paced life. They came first to Springfield to help Lixia’s sister open the restaurant in Cedarville in 2012. And the following year they began making plans to open Lucky Dragon in Yellow Springs.

Much work was needed to return the building, owned by Lisa Cermele of CB Property Management, to a serviceable restaurant. All of the former equipment and much of the structural additions that former Asian Bistro owner Jenny Chen had installed over the 10 years she owned her restaurant were removed when she closed a year ago March. And the new renters spent nearly a year remodeling the space for their operations.

The new space offers five booths for on-site dining, a beverage cooler and a station for hot tea and water. And the menu features a lot of healthy, vegetarian dishes, as the family understands Yellow Springs to be a health-conscious village with more vegetarians per capita than other places they’ve been. And everything, including the egg rolls and springs rolls, is made from scratch in-house, Angela Yang said.

“We try to have a special every day, like today is a vegetarian special with tofu,” Yang said.

Though they hesitated to talk about their traditional Min cuisine, the food of Fujian province is heavily influenced by the bodies of water along its eastern and southern borders, including the East China Sea, the South China Sea and the Taiwan Strait. According to Web stories from CNN and China Daily, the province’s forested mountains produce a variety of mushrooms and bamboo shoots, while from the water comes 167 varieties of fish and 90 kinds of turtles and shellfish. The fine cutting techniques and braising and steaming methods the province is known for produce well-known dishes such as Fo tiao qiang, or “Buddha jumps over the wall.” The name comes from a story about a scholar who was picknicking outside a temple in Fujian, when the monks smelled such a delightful aroma from his fire that they jumped the walls of the monastery to have a taste.

While Lucky Dragon isn’t likely to serve that regional delicacy, the Gaos’ hot and spicy chicken or singapore chow mei fun might be good enough to cause some customers to jump over their threshold. And for those more health conscious types, even the “diet menu” of steamed vegetables and meats with no oil, salt, sugar or starch might also be good enough for jumping of some kind. The restaurant also serves a full menu of Chinese-American favorites, including steamed or fried dumplings, hot and sour soup, noodles, chicken, beef, seafood, and dinner combinations with pork fried rice and an egg roll.

While the Gaos will soon lose Angela, the three family members have a friend who also works at the restaurant. Between the four of them, they will spend their time between Yellow Springs and their home in Springfield, where the Yang’s two young children attend school.