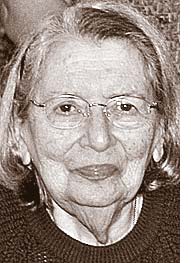 Edythe Okun Powers, of Yellow Springs — a grandmother, mother, wife, daughter, artist, dear friend — passed away early on the morning of March 20 at the Friends Care Community Center. She was 86 years of age. Born into an Orthodox Jewish family in Paterson, N.J., October 15, 1927, to émigrés Ruth Sherin Okun and Leo Okun, she grew up a single child. She spent her early years near New York City, and then was admitted to Antioch College, where she majored, excelled and graduated with a degree in fine arts. She was attending Antioch when she met John Powers, who preceded her in death in 2001.

Edy truly loved Yellow Springs, the family’s neighborhood around Talus Drive and the house they had built. Two years in Connecticut and a year in Indiana were the only years she lived outside of Yellow Springs after her arrival at Antioch. From 1962 onward, 960 Talus Drive was the family home.

As a devoted mother, she instilled a deep sense of reverence for nature and all its wonders, an appreciation of the arts, and a wry sense of humor. At the Yellow Springs Library, and with the help of the YS Library Association, Edy was instrumental in the founding of and making selections for the Corky Schiff Circulating Art Collection in the early 1980s. Her selflessness, graciousness and artistic talent with painting, ceramics and sketching will be remembered. She was a great soul.

Memorial gifts may be made to the Unitarian Universalist Fellowship of Yellow Springs or the Glen Helen Ecology Institute. Early spring flowering bulbs may be plentifully planted this Fall in her memory. All are welcome at a memorial service on Saturday, June 7, at 2 p.m., at the Fellowship. Further details to follow.