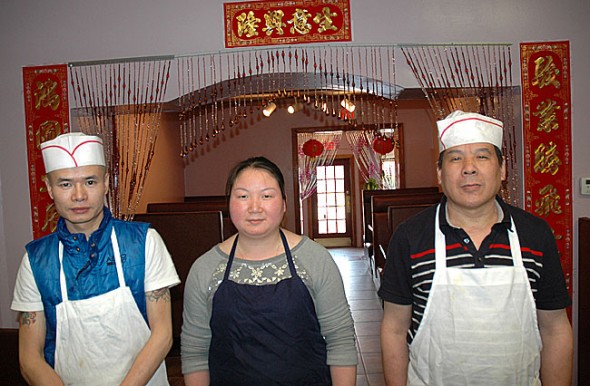 From right, Ken Yang and Lixia Gao, and Lixia's father Zhi You Gao opened a Chinese restaurant at the former location of Chen's Asian Bistro.

A family from Fujian Province in southeast China has opened Lucky Dragon, a new Chinese restaurant at 126 Dayton Street. After about a year of renovations on the building, Ken Yang and Lixia Gao opened the business with Lixia’s father, Zhi You Gao, in the former location of Chen’s Asian Bistro. Lucky Dragon serves a vegetable-heavy array of Chinese-American dishes, including favorites such as General Tsao’s chicken, lo mein noodles and Szechuan beef, as well as appetizers, soups and fried rice.

Lucky Dragon opens daily at 11 a.m., (noon on Sundays) and closes at 10:30 p.m. every day but Friday and Saturday, when the business stays open until 11 p.m.

Read the full story in this week’s print News.