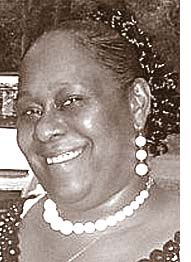 Patsy L. Amos Demmings, of Dayton, formerly of Yellow Springs, went home to be with the Lord on April 1. She was 52.

Patsy was born on March 7, 1962, in Columbus, Ohio. She was the daughter of the late Winsom and Dr. Oris Amos Cross and the step-daughter of Charles Cross, of Charlotte, N.C. Patsy accepted Jesus Christ early in life and became an active member of Central Chapel AME Church, participating in the youth choir, and she later became a member of the inspirational choir, where she was often the soloist.

Patsy attended elementary and middle school in Worthington, Ohio. Her family moved to Yellow Springs in 1976, where she attended and graduated from Yellow Springs High School. She was known for her vibrant personality; she never met a stranger. Patsy’s smile and infectious laugh would always light up a room! She always had a strong interest in clothing and style and to cultivate that interest, she attended the Atlanta School of Fashion and Design. She married Jeffrey Demmings Sr. and from this union they were blessed with two children, Jeffrey Jr. and Angela Renee.

Patsy was preceded in death by her parents. She is survived by her son Jeffrey (Krystal), daughter Angela (Frederick) and six grandchildren: Jaden, Jordan, Brendan, Juliette, Kristina and Jeffrey III. She is also survived by special cousin, Angela Stover; sisters-in-law Deneen Demmings and LaShanda Jones; brother-in-law, Anthony Demmings; special friends Teresa Bondurant, Teresa Evans, Shirley Martin, Shawn Pritchard, Tami Smith as well as the Moody and Evans family; and a host of other family and friends. A service for Patsy was held on Saturday, April 5, at Central Chapel AME Church, with the Reverend Timothy Liggins officiating and Reverend Brenda Freeman serving as eulogist. Interment followed at Glen Forest Cemetery.