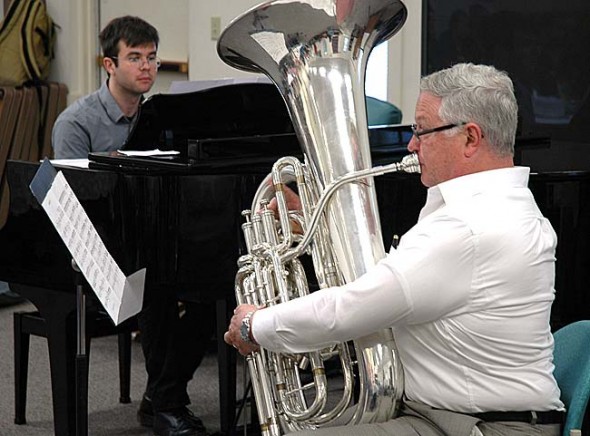 Getting low at the Yellow Springs Senior Center

Last Thursday, participants in the Yellow Springs Senior Center’s Third Thursday Potluck were treated to the rich, low sounds of a tuba — usually relegated to the back of the band or orchestra — showcased as a solo instrument.

Soloist Hans Marlette was accompanied by pianist Sam Reich, a regular performer at the Senior Center.

Mr. Marlette, who has played the tuba for 51 years and with the Air Force Band for 31, states, “There is no other instrument I would rather play; its sonority transcends across a wide range of musical expressions.”

“As a solo instrument the tuba is relatively new,” Marlette writes in an email, stating that only within the last 75 years has the tuba been treated as a serious solo instrument with its own literature, not just as a novelty or as harmonic support in an ensemble.

The half-hour program included the Sonata No. 1 in F by Benedetto Marcello, Gloria Arioso by Barbara York, a contemporary arrangement of Amazing Grace, and a low version of the aria “Nessun Dorma” from Puccini’s opera ‘Turandot’, made famous by the late tenor Luciano Pavarotti and requested by Senior Center staff member Corinne Pelzl.

The audio clip below is the Largo of the Marcello sonata.

Mr. Marlette currently performs with many ensembles in the area, including several ensembles at Cedarville University, the Ohio Valley British Brass Band and the Greene County Adult Community Band. He performs locally with the Yellow Springs Brass Quintet.