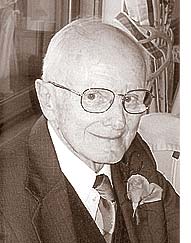 Mr. Closz was born May 1, 1921 in Ann Arbor, Mich., a son of the late Harold F. Closz M.D. and Elizabeth Cox Closz. He married Honora Ganoe Closz on May 28, 1944,  and she survives at the residence in New Wilmington. He retired from Westminster College as controller for the last 11 years of his employment.

He and his wife moved to New Wilmington from Yellow Springs, where he worked at Antioch College in the bursar’s office. He served his country as a pilot during World War II. Most important to him was his family. He was a member of the New Wilmington Presbyterian Church.

Survivors in addition to his wife, Honora, are three daughters, Barbara Craig and Betsy Field, both of Sunbury, Ohio, and Linda Winters, of New Wilmington; two sons, Larry P. Closz of Huntingdon, Pa. and Charles R. Closz of Maryville, Tenn.; 12 grandchildren and 21 great-grandchildren. He was preceded in death by two brothers, Harold and William Closz; a sister, Betty West; and a son-in-law, Randall Craig.