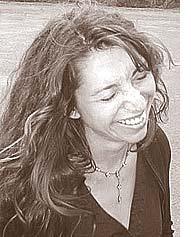 Rebecca Teilhet, of Yellow Springs, passed away on July 11. She was 42.

Becky Teilhet, daughter of Mary Louise Tackett and the late Ottis Lawson, died an untimely death while hiking in Estes, Colo. She, her husband and a close friend were all three struck by lightning while hiking in the Rocky Mountain National Park.

She is survived by her husband, Justin, and her son, Jay Teilhet; her mother, Mary Louise Tackett, and step-father, Elby Tackett, of Fairborn; sister Sheliah Cundiff, of Mechanicsburg; sister Linda Krull, of Vandalia; brother Daniel Lawson, of Kettering; and brother Timothy Lawson, from Alabama. She is also survived by her beloved dog companions, Olee, Betty and Biloxi (Lil Bit).

Becky was a faithful wife, mother, daughter, sister and friend to many. She was a graduate of Fairborn High School. She supported her husband Justin in his career as an artist. Their studio, Cliffside Clayworks, is at their home in Clifton. She will be loved and remembered by the many children in the village, whom she took care of, as “Miss Becky.” Her love of animals and her charitable spirit led her to become a foster parent for abused and neglected dogs through the Miami Valley Pit Crew. She was an avid gardener, knitter, seamstress and mushroom hunter, amongst many other things.

She will be greatly missed by family, friends and the YS community.

Services for Becky will be held at Jackson, Lytle and Lewis Funeral Home, on Friday, July 18. Visitation will be held from 4–8 p.m., with a service at 8 p.m.

Her family has asked that, in lieu of flowers, donations may be made in her honor to the Miami Valley Pit Crew, so that her generosity and compassion can continue through their work.

A more in depth look at Becky’s life will be included in next week’s News.