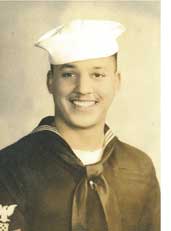 Alfred V. Johnson Jr. died Thursday, July 31. Beloved husband of Anna H. Johnson; devoted father of Alan Hull Johnson (Kathryn B.) and Alisa Johnson. He is also survived by two grandchildren; sister, Anna Mae Johnson; cousin, Rita Campbell; sister-in-law, Mary H. Bowers and other relatives and friends. Mr. Johnson is pictured during World War II as a member of the U.S. Coast Guard, aboard the Sea Cloud. He was lain in state at St. Mary’s Episcopal Church in Foggy Bottom, Washington D.C., on Saturday, Aug. 9, and interred at St. Paul’s Rock Creek Cemetery. In lieu of flowers, donations may be made to The Saint Mary’s Episcopal Church Endowment Fund. Online condolences may be made to http://www.stewartfuneralhome.com.