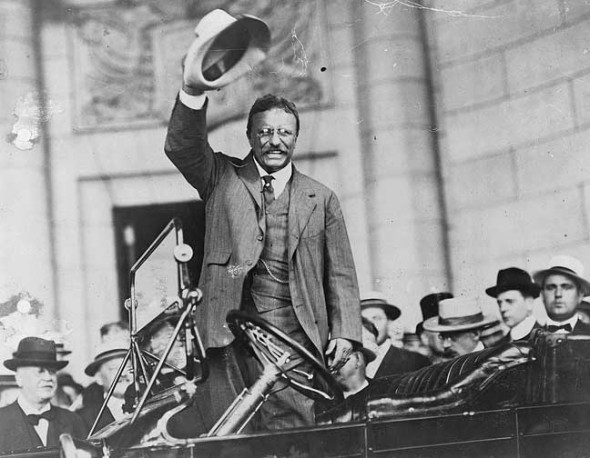 The life of Theodore “Bull Moose” Roosevelt, the 26th president, is one subject of the new seven-part series, “The Roosevelts: An Intimate History” by director Ken Burns that will air on ThinkTV in September. The Little Art Theatre will host a preview screening at 2 p.m. on Sunday, Sept. 7, with family member and Antioch College President Mark Roosevelt, who will give a brief introduction about Theodore, Franklin Delano and Eleanor Roosevelt, whose public and private lives are the focus of the PBS series. (submitted photo)

According to their biographers, the three most famous Roosevelts in American history — two presidents and one first lady — stood for an ideology of public good, including things such as public health and welfare, land conservation, women’s rights, civil rights and workers’ rights. But according to a Roosevelt relative well-known locally — Antioch College President Mark — the country has changed drastically since the first half of the 20th century. And that, according to historian and screenwriter Geoffrey Ward, makes a recent project about the lives of Presidents Theodore Roosevelt and Franklin Delano Roosevelt and First Lady Eleanor Roosevelt, relevant and important for a modern audience.

The seven-part series Ward created with documentarian Ken Burns, “The Roosevelts: An Intimate History,” will air on ThinkTV, the local PBS affiliate, beginning on Sunday, Sept. 14, with a free preview event at the Little Art Theatre on Sunday, Sept. 7, at 2 p.m.

“Some things are really national in scope, and I think this is a show for all Americans everywhere,” Ward said in a phone interview on Monday. “Americans talk a lot about leadership these days, and I think people should be reminded of what makes great leaders and then settle for nothing less.”

Mark Roosevelt will give a brief introduction to the preview. Though he was not involved in the production of the series and is only distantly associated with the family members of his great grandfather, Theodore Roosevelt, Mark Roosevelt said last week that he shares his ancestors’ core values — namely that those born to privilege have a responsibility to serve and that government should be the agent of those in need. He resists being defined by the lives of his predecessors, but is happy to admit that he likes most of the influence his family has had on his own life.

“There’s an attitude they had toward their own privilege — first, that there was some sort of obligation, and that at least they knew they had been given a great deal and didn’t act as though they had done anything special to deserve it,” Roosevelt said. “And they all had the freedom that comes from privilege to turn against the class they were from,” he said, citing for example the campaign speech FDR gave in Madison Square Garden in 1936 in which he said that never before had the “enemies of peace” (i.e. financial monopoly, class antagonism and war profiteering) been so “unanimous in their hatred for me,” to which he said, “I welcome their hatred.”

At the root of this 20th century family with a social conscience was an early Republican, Theodore Roosevelt, aka “TR.” Though the series tells the story of the family from Theodore’s birth in 1858, what is typically known is that he served as president from 1901 to 1909, during which he greatly expanded the national parks system, pushed to build the Panama Canal, and was known for a foreign policy he described as “speak softly and carry a big stick.” Toward the end of his tenure, TR became disenchanted with the Republican core and launched his own Progressive Party, campaigning in the 1912 election on a platform he called “New Nationalism” in support of women’s suffrage, national healthcare, social insurance, strong government regulation of industry and a federal income tax.

He lost the election, but inspired his younger fifth cousin, Franklin Delano, to seek and win the same office two decades later. Ward, who has written three books about Franklin and researched TR as well, was pleased to discover during his work on “The Roosevelts” a previously unseen photo of Franklin at TR’s inaugural ceremony, which supported his theory that “without Theodore Roosevelt, we would have never heard of FDR or Eleanor,” he said this week.

Franklin was a Democrat, whose wife, Eleanor, TR’s niece, wanted him to support her uncle. And when Franklin defeated Republican Herbert Hoover for the presidency in 1933, the Roosevelt family values again came to the fore in an even more socially conscious way. FDR’s “New Deal” provided government jobs and relief for the millions of people who were left unemployed and destitute during the Great Depression. He also worked to increase regulation of banks, which TR had started. Franklin led the Allied forces with Great Britain and the Russians to win WWII, and he also supported the development of the nuclear bomb and the internment of 100,000 Japanese-Americans during the fight.

Eleanor Franklin, meanwhile, was the most active First Lady the country had ever seen. According to Ward, Eleanor was “the greatest of all first ladies — the one everyone’s measured against.” She was the first in the world to speak publicly at press conferences and national conventions in support of equal rights for women and racial minorities, as well as greater U.S. participation in the United Nations. And after Franklin’s presidency, she served on the U.N.’s Human Rights Commission, and later on the U.N. General Assembly and the U.N. Commission on the State of Women. President Harry Truman, who succeeded Franklin, was said to have called her “First Lady of the world.”

The story of “The Roosevelts” is a personal one that includes the inner struggles of all three leaders — according to Ward, TR suffered from debilitating asthma; FDR acquired polio in 1921 and was paralyzed from the waste down; and Eleanor was the orphan daughter of a delusional alcoholic. These are the kinds of challenges that every human faces, and these three overcame extraordinary obstacles to seek something greater for the whole, Ward said.

“It was FDR who said, ‘We [as a country] can’t get on well if everyone isn’t getting on reasonably well.’… The Roosevelts felt they owed, ambition aside, it to their fellow citizens to be of service to those who were less well off.”

ThinkTV brings “The Roosevelts” series to Yellow Springs, which has more supporters of public television than any other community in the southwest Ohio and northern Kentucky region, according to Greg Schell, director of corporate sponsorship at ThinkTV. The preview event at the Little Art is co-sponsored by Antioch College, WYSO radio, the Little Art Theatre, ThinkTV and the Yellow Springs News.

The Roosevelts will air beginning on Sept. 14 from 8–10 p.m. on seven consecutive days. According to PBS, the series focuses on both the public and private stories of the influential family. “Together, [the Roosevelts] redefined the relationship Americans had with their government and with each other, and redefined, as well, the role of the United States within the wider world. The series encompasses all the history the Roosevelts helped to make … But it is also an intimate human story about love and betrayal, family feeling and personal courage and the conquest of fear.”