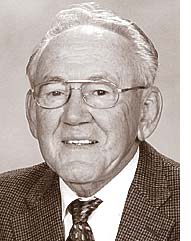 Kenneth R. Dillon, of Yellow Springs, 85, passed away Friday, Oct. 17, at Dayspring of Miami Valley. He was born Oct. 6, 1929, in Lawrence County, Ohio, at the Handley Place on John’s Creek. He was the son of the late John L. Dillon Sr. and the late E. Nellie (Malone) Dillon.

Ken graduated from Waterloo High School in 1947. After high school, he entered the army in 1951 and was a member of the 24th Infantry Division, 19th Infantry Regiment, Company E. He served eight months in Korea, and was wounded on Oct. 14, 1951. He then served in Japan from February to June of 1952. Ken earned a Combat Infantry Badge, three battle stars, a Good Conduct Medal, Purple Heart, Army of Occupation Medal with a Japan Clasp, Korean Service Medal, United Nations medal, and National Defense Service Ribbon. He was discharged in October 1952, having earned the rank of Corporal.

Ken was employed at Wright-Patterson Air Force Base for two years, then at Dayton Sash & Door for 16 years. He also worked at Morris Bean for 28 years.
Ken married Stella Robinson, of Doe Valley, Tenn., on Oct. 4, 1958, in Potsdam, Ohio. He was a member of the Greene County Korean Veterans Association, Chapter 125. Ken also was a member of the Purple Heart Association and the Department of Ohio Korean War Veterans Association finance committee. He also attended services at Pleasant Grove Missionary Church in Yellow Springs.

Ken was preceded in death by his wife, Stella, on March 10, 2006. He was also preceded in death by his parents and two brothers: John L. Dillon Jr. and Harold L. Dillon. Ken is survived by his sister, Helen Riley, of Enon; sisters-in-law Bernice Dillon, of Yellow Springs, and Faith Waltke, of Xenia; and brother-in-law Jim Robinson of Doe Valley, Tenn. He is also survived by many nieces, nephews, close friends and good neighbors.

Services were held Wednesday, Oct. 22, at Pleasant Grove Missionary Church, with the Revs. Kenneth Moore and Matt Ransom officiating. Burial followed at Byron Cemetery, Fairborn. In lieu of flowers, contributions may be made to the Korean War Veterans Association, Chapter 125, 430 Stadium Drive, Xenia, OH, 45385, in his memory. Condolences may be made to the family at http://www.NeeldFuneralHome.com.