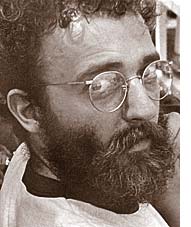 James “Jake” French Lehrer died suddenly in Asheville, N.C. after a brief illness. He was 62.

Jake was born in Sandusky, Ohio, in 1952, and was the son of John and Mary Janis (Wiesler) Lehrer, both of whom preceded him in death. He was a graduate of Sandusky High School and Wittenberg University. He spent most of his adult life in Durham, N.C., where he worked for over 20 years in the Orange County Public Library System, serving as branch manager of the Carrboro Library where he successfully worked to create a community library within the public school.

After retirement, he moved to the Asheville, N.C. area in Leicester, working for the Southern Appalachian Repertory Theatre (SART) in Mars Hill and with the Buncombe County Board of Elections.

Jake was a beloved son and brother, an avid reader, a dog lover, a skilled bridge player, knitter, artisan and communicator with his many, many friends who lived all over the country. He was a frequent visitor to Yellow Springs. Above all, he was a devoted friend who went out of his way to support any friend who needed help.

He is survived by his three brothers, John (Julie) in Apple Valley, Calif., Tom (Eileen) in Bluffton, S.C. and Bob (Lynne) in Mt. Gilead, N.C.; a niece, three nephews and a great-nephew. Many close friends, including Linn Bobo, Karen Diebel, Sheila Drennen, Alan Staiger and Katie Egart, all of Yellow Springs, also survive him, as well as his dear friend Judi Lally, of Asheville, N.C., who cared for him in the final year of his life.

A celebration of Jake’s life will be held in Chapel Hill, N.C. at a later date. Donations in memory of Jake may be made to Brother Wolf Animal Rescue, P.O. Box 8195, Asheville, NC, 28814.