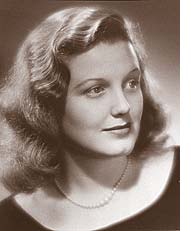 Patricia “Pat” Martin Dell died peacefully at home on Thursday, Nov. 13, from complications following a courageous battle with Parkinson’s disease. She was 87.

Pat came to Yellow Springs in 1945 to attend Antioch College as a literature and English major. When the lonely freshman found Antioch less friendly and familiar than Grier, she would go to Kelly Hall and sing her heart out. She had a beautiful, classically trained voice, and had at one time seriously considered a career in music. (Pat told her niece just recently that one of her most thrilling life experiences had been singing Bach’s “St. Matthew’s Passion” in Kelly Hall under the direction of Andrew Apostle.) After becoming involved in campus musicals, in which she had several lead roles, and meeting Warren Dell, a “townie” and the love of her life, she found her place on campus, and said years later that Antioch had been very good for her. The college co-op program took her to New York City, where she worked for Mademoiselle magazine. She loved to “walk a city,” which she claimed was the only way to really get to know it. Her family never got tired of hearing her New York stories, especially the one about eating three 5-cent vegetables from the automat for dinner so that she’d have enough money to go to The Met, and stand at the back in her highest heels to watch the operas. Thanks to the co-op program, which she thought was one of the best parts of Antioch, she discovered that she didn’t want to continue in her chosen major. She switched to early childhood education her junior year and graduated in 1950.

“Miss Pat” was a born teacher. Her career began at the Antioch Nursery School in Day House, where she later became director, and continued until her long-awaited daughter Camden (Cammy) was born in 1962. She returned to teaching in 1969 as a kindergarten teacher at Mills Lawn Elementary and stayed until 1977, when she accepted the nursery position at the Antioch School.

Pat had great respect for, and trust in, young people. She adored teaching three and four year olds. As a voracious reader and a musician herself, literature and music were an important part of what she shared with her students. She knew that young children learned best through play, so her schoolroom was filled with well-chosen equipment that provided unlimited opportunities for growth. Former students fondly remember the entire class being invited to her wedding to Warren in 1952 (and eventually playing dress-up in her wedding gown and shoes!), holding piglets from the farm, and end-of–the-year picnics there that included tractor rides with Warren. An authority in early childhood education, Pat mentored many student teachers from Antioch College, spoke at NAEYC (National Association for the Education of Young Children) conferences, and penned many articles. She shared her knowledge with many families and always knew just the right books to recommend for young readers. Pat retired from teaching in 1989, and her career was celebrated on the front page of the Yellow Springs News.

As important as it was to her to have a career, family life always came first. Pat was a wonderful, loving, fun, supportive parent, and when her grandson Daniel (Danny) was born in 1997, no one enjoyed being a grandmother more. Pat absolutely adored him, and was so proud of his many accomplishments, especially in music. She was most proud, however, of the kind of human being he is.

After living in town in a house that Warren built himself, Pat and Warren restored an old log cabin on a 45 acre farm at the end of Bryan Park Road. They did most of the work themselves, coming home during lunch breaks to stain kitchen cabinets, and burning an outhouse every weekend until they were all gone. Their inviting farmhouse was the center of their lives for over 50 years, and they hosted their niece’s wedding, their daughter and son-in-law Jim’s wedding reception, class reunions, performances, family holidays and wonderful parties. Cammy, her three dearest cousins, and many friends relished playing and growing up on the farm.

Pat appreciated beauty, and took great pleasure in decorating, entertaining and cooking well. As much as she enjoyed people, she needed lots of “alone time,” which unfortunately had to be limited as her illness progressed. Pat was genuine, unassuming, down-to-earth, classy and sophisticated all at the same time. She and Warren made a stunning couple and enjoyed traveling, dancing, attending concerts and spending their days together until Warren’s death in 2007. Diminished but not defeated by Parkinson’s disease, Pat’s essence shone through to the very end. Cammy wonders if her mother had any idea how much she was loved, respected and treasured, and how much her presence was valued by others. In addition to her daughter’s family and adoring nieces, Pat was cared for with respect and affection by Hospice of the Miami Valley, Senior Helpers, Lynn Adams of Home Buddies Homecare, Mary Claire Greco, Cecilia Kimball and Lisa Crosby.

Pat was the daughter of Harold and Dorothy Long Martin, and sister to Marjorie (Marj) Martin Carlson, all deceased.

A memorial service will be held Monday, Nov. 24, at 3 p.m., at the Yellow Springs United Methodist Church, followed by a celebration of her life in her daughter’s home. Friends and family will have the opportunity to share memories of Pat during the service.

Contributions in Pat’s name can be made to Hospice of the Miami Valley; Scholarships for Antioch School Nursery Families; The Gardner Center for Parkinson’s Research at PO Box 670570, Cincinnati, OH 45267-0570; Antioch College or the Greene County Council on Aging.