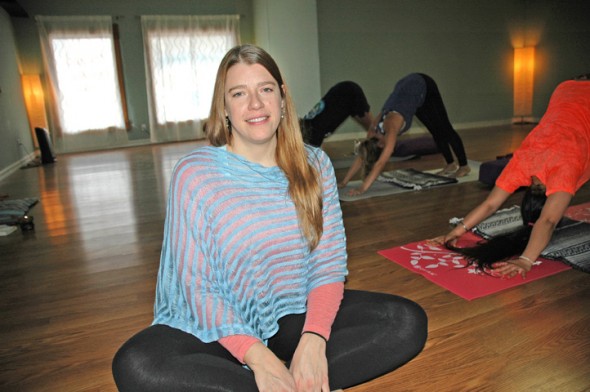 Jen Ater will host a grand opening for the expansion of her yoga studio, Inner Light Yoga & Wellness, on Saturday, Dec. 6, at the Beavercreek studio. The studio will offer free yoga from 10 a.m.–4 p.m. as well as refreshments and membership discounts at the opening. Ater welcomed students to the studio’s first class on Monday, Dec. 1. (photo by Lauren Heaton)

Local resident Jen Ater has always been drawn to wellness — be it of the environment or the body. Starting out in the environmental studies field 15 years ago, she later moved into massage, then yoga, then counseling before opening her own center, Inner Light Yoga & Wellness, last year in Beavercreek.

This month, Ater is expanding her business to a space about three times the size of the previous one and will offer more and different types of classes in the new space. Her desire to expand is rooted in her desire to make yoga, meditation and wellness in general more available to more people in the area.

“With the cultural stress of isolation and separation I see, I feel like yoga can be a very healing practice in general,” Ater said in an interview this week. “My own experience with yoga is that it’s been very healing for me, and I believe that everybody should have access to it.”

Ater celebrates the new space with a grand opening on Saturday, Dec. 6, 10 a.m.–4 p.m. at the studio, located next door to her old studio at 1265 North Fairfield Rd. in Beavercreek. The event will feature free 45-minute yoga classes all day, as well as refreshments and deep discounts on membership and services such as massage and other body work.

The new Inner Light studio is a sprawling 5,000 square feet of space for two large simultaneous yoga classes, as well as two massage rooms, a large lounge with space to sell yoga and wellness products, and several smaller rooms for private yoga classes. It’s a big move up from the two-room studio Ater started with in January 2013. But she outgrew the space as she added about 10 regular yoga instructors, some of whom she trained through Inner Light’s yoga teacher training program.

Ater has also broadened her own training in the past two years, becoming certified to teach paddle board yoga (just like it sounds, yoga on a stand-up paddle board), which she taught at Eastwood Lake Metro Parks this summer. And this year she got certified through Mind Body University to teach aerial yoga, that is, yoga in the seat of a swing and done either on the floor with foot and wrist loops or in swinging motion.

While the new studio doesn’t have a lake, it does offer enough space to install swings for aerial yoga classes, which she hopes to begin sometime in January. The new space will accommodate hot yoga, youth classes, yoga therapy, prenatal yoga, teacher training and possibly accupuncture. And it also allows her to host family wellness nights, when she can hold either parent-child classes or hold youth and adult classes simultaneously, with time and space for mixing over tea and refreshments afterward.

In short, the new studio accommodates the kind of wellness community she wants to cultivate in Beavercreek.

“My intention is to develop a beautiful healing community here that’s supporting me, too,” she said of her own path to yoga and the urge to help others through it. Her goal as a young person to get involved with helping people in other countries has morphed somewhat since the beginning.

“I used to want to help people overseas, but I’ve surrendered to the fact that there are a lot of people in Dayton who need help,” she said.

In her bid to make wellness available to more people, Ater has loftier goals of someday partnering with a nonprofit organization such as Project Yoga, a Cincinnati nonprofit group that offers yoga to students in urban schools and people in homeless shelters. She has experience teaching yoga in the Yellow Springs schools through a youth yoga project she co-led in 2012. And she hopes to eventually create an outreach program connecting to students and citizens who would benefit most from the healing power of a yoga practice.

Until then, Ater plans to fill the current space with returning and new members who join, like she did, to be healthy and feel good in community.