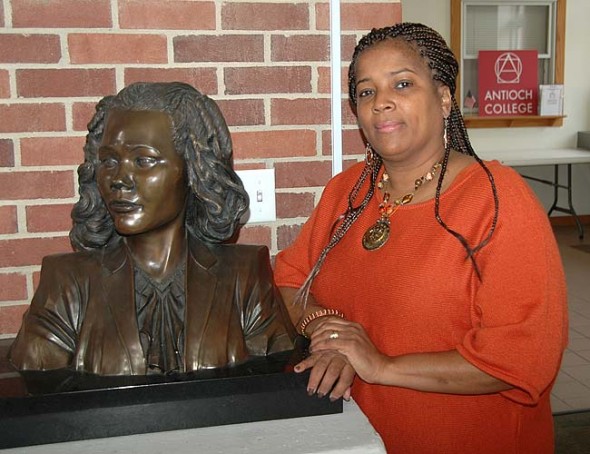 Mila Cooper began her work in September as the new director of the Coretta Scott King Center for Intellectual Freedom on the Antioch College campus. She comes to the village after 12 years as director of community outreach at Baldwin Wallace College. (photo by Lauren Heaton)

Mila Cooper has spent the past 25 years serving as diversity and community outreach director at over half a dozen colleges and universities around the country, but never has she felt responsible for as much as she does as the director of the Coretta Scott King Center for Intellectual Freedom at Antioch College. On a small campus with an outsize legacy in social justice, Cooper knows there is much demand to be part of the solution to diversity issues both on and off campus here, she said in an interview last week. But she is taking her time to get to know the community before committing herself to the role she is shaping as head of the center.

“I want to get this right,” she said.

Supporting a diverse and socially just campus is one part of getting it right. Currently at Antioch there is no diversity plan, and creating one typically involves implementing best practices in admissions and retention, curriculum planning, training for students, staff and faculty, multi-cultural programming, and intentional hiring practices.

But supporting a diverse and socially just community off campus is another project entirely — and one Cooper feels partly responsible for. Partly it means instilling in others the leadership skills to push for change wherever it is needed.

“There is a legacy of social justice on our campus, and I can’t separate that from the Coretta Scott King Center, knowing who she was and who Martin Luther King was,” she said. “They very much stood for social justice and social change, and we couldn’t honor that without equipping our students to make an impact.”

Cooper jumped in at the deep end at Antioch. She started her job in September, a year after previous director Derrick Weston vacated the post, and one month into the national uproar over issues of police brutality against the black community. Since she came she has supported student organizing and demonstrations around the August police shooting of John Crawford at the Beavercreek Walmart. And through this week, the CSK center has been used as a gathering space for organizing, making signs and sharing about issues of race and the justice system.

Cooper has also spent her time so far reaching out to multiple groups on campus to figure out how she can make the overall college environment as welcoming as possible to people of different cultures and backgrounds. She is now part of the campus diversity committee, which has focused on programming since Weston left. She meets with the admissions team and the senior (administrative) leadership team; attends faculty meetings, community life, and student programming board meetings; and is currently chairing a search committee for a community life position, as well as preparing for the community’s annual Martin Luther King Jr. celebration in February.

Through her work so far, Cooper has made some observations. The college has made a good start to serving diversity needs through its admissions policies (the incoming class of 71 students has 21 non-white or mixed race members, including nine Hispanic and eight African-American students), community life staffing, and curricular programming, such as an intercultural communications course, social justice and literature course and its language programs. But the college needs to complete a campus-wide assessment about how it’s currently serving the overall need for diversity.

Cooper also wants to make the center “a vibrant place that people are drawn to to learn, celebrate and discuss the tough issues of our time” in a way that stimulates critical thinking among the students, she said.

Cooper, 50, came from Baldwin-Wallace College, where she spent 12 years as the director of community outreach and service learning. Prior to that, she moved a lot with her husband, an attorney and minister in the AME Church, and worked as a diversity officer at Penn State, Capital University, Xavier, and Kenyon, where she started out as assistant dean in 1989 and went on to create the school’s office of multicultural affairs.

She originally hails from Philadelphia and holds a master of divinity degree from Payne Theological Seminary in Wilberforce and a graduate certificate in nonprofit management. She and her husband live in Englewood with their two daughters.