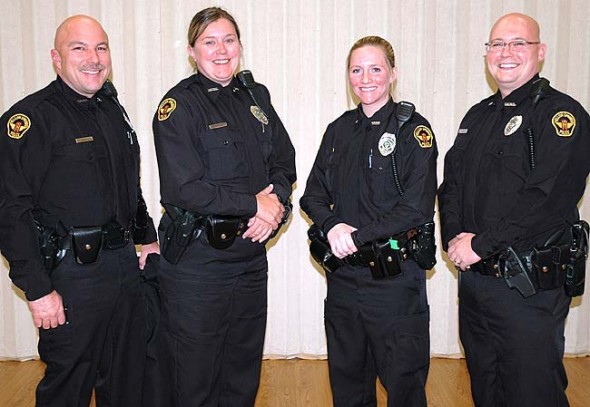 Four police officers joined the Yellow Springs Police Department this year and they, along with the rest of the local force and two police chief finalists, greeted villagers at a community gathering on Monday, Nov. 17. Shown from left are new officers Jeff Beam, Stephanie Spurlock, Jessica Frazier and Mark Charles. (Photo by Lauren Heaton)

Jessica Frazier had a good idea of the things law enforcement officers could do when police helped her family on several occasions as she was growing up in Florida. Originally from Montgomery County, she moved back to the Dayton area as a teenager and took some criminal justice courses at a local career center, thinking she might like being a police officer. Her father, who’d spent 24 years in the military, wanted her to go to college first. So she put herself through Sinclair while working at the Greene County Jail. As soon as she graduated, Frazier signed up for police academy.

Her first post was serving as a part-time officer with the City of Union. She was there a year before joining the YSPD in July. She came here, she said in an interview earlier this month, because she wanted to spend her time talking to people and counseling those needing assistance getting back on their feet.

“Law enforcemnt has always intrigued me because of my experience as a kid and because I wanted to help people in crisis,” she said.

Frazier, 22, is one of four officers who joined the Yellow Springs Police Department this year under former Police Chief Anthony Pettiford. They joined the more senior members of the YSPD at a meet-and-greet event on Monday, Nov. 17, at the Bryan Center, where the new officers shared a little about their lives and desire to serve in Yellow Springs.

Several of the officers had totally different careers before getting into law enforcement. Jeff Beam, 48, grew up on the grain and cattle farm his family has had in Caesar Creek Township since the 1880s. Loving the land but aiming for a different life, he started out in the electronics field selling pneumatic equipment and later repairing copiers for a company in Franklin. But around the age of 40, Beam decided what he really wanted was a career in law enforcement. He became a Greene County corrections officer, went through police academy and in March got his first post as a patrol officer in Yellow Springs.

Working in the village makes sense partly because he is close and he knows the community — he and his family live on Clifton Road. But Yellow Springs also suits him because the slower pace of village life means that police officers here can be effective doing simple things, such as safety education, that prevent crime before it occurs.

“My style is more laid back — we’ll get into stuff if we need to, but prevention is even better,” he said.

Stephanie Spurlock, too, had a long-lived career in banking before finally fulfilling the intention she had as a younger person to become a police officer. Spurlock, 39, was in her 20s and living in Milwaulkee when she started down the path of training as an officer. But motherhood sidetracked her and brought her back to Ohio, where she joined a bank and worked in every position from teller to mortgage broker. After 17 years in the numbers field, her earlier intent surfaced again, and after working for a year at the Fairborn Jail and part-time with Jamestown Police Department, Spurlock joined the YSPD.

Though she commutes from Centerville, Spurlock’s family intends to move to Greene County within the year, she said. To her surprise, the organization and compassionate leadership skills she developed as a mother of three have been quite useful as an officer in a small town, she said.

“Being a mom helps a lot,” she said. “Plus I’m a talker anyway — I love people and I especially love dogs.”

Mark Charles, 31, graduated with Frazier from police academy and they later worked together in their first posts with the City of Union, where he grew up. And like the other three new officers, Charles had a different first career, one as an engineer for Polycom, before he was laid off and decided to follow his childhood dream to work in criminal justice. He joined the YSPD in September because he felt it was small enough that he could make a difference with his work. He lives in Beavercreek with his wife and three children.