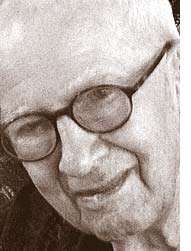 John “Jack” Waite was born to Genevieve and Henry Chester Waite II on Aug. 6, 1922, in St. Cloud, Minn. His childhood was spent in Yellow Springs, with his sister and brother, Mary Caroline and William. Jack met his beloved wife and best friend, Jean Hutchinson, marrying in September of 1942.

Jack attended Antioch College (as did his father, sister Mary and children “Bo” Henry and Barbara). He obtained his medical degree from the University of Buffalo in 1947 and a Master of Surgery from Ohio State University in 1953. While pursuing his medical career with the U.S. Public Health Service, Jack was stationed in several areas of the country with Jean and their five children. They moved to New Orleans in 1961, settling in Baton Rouge in 1967.

Jack was deeply committed to social justice, racial equality and helping others. He was known in the medical community not only as a compassionate doctor, but also as a gifted educator and professor of surgery at LSU.

In his spare time, Jack reveled in spending time with his family, played a variety of musical instruments and traveled the world with Jean. Jack was a founder and committed member of the Unitarian Church of Baton Rouge up until the time of his death. Jack will be remembered as a nurturing and loving friend, brother and father with an insatiable desire for learning. His presence will be profoundly missed by all who were fortunate enough to know him.

Jack is survived by his sister, Mary Caroline Waite Nitschke. He will be remembered lovingly by his five children and their spouses: Henry “Bo” Waite (recently moved back to Yellow Springs), Barbara Waite-Jaques, Karen Waite, David Waite and Elaine Waite Piedra. Jack’s memory will live on through his 10 grandchildren and 20 great-grandchildren, and many, many friends who will miss him dearly. Jack was preceded in death by his wife, Jean Waite, and his brother, William Waite.