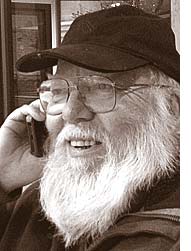 David William Prince, 73, of Athens, died on Sunday, May 17, at St. Ann’s Mt. Carmel Hospital in Westerville, Ohio, from complications of neck spine surgery. Born Feb. 2, 1942, in Anderson County, S.C., he was the son of the late Marian Starkey Prince and Alton E. Prince. He is survived by his wife, Bonnie L. Prince, their son Jonathan D. Prince, his sister-in-law Wendy Guy, his aunt Ruth E. Skinner of Nashville, Tenn., and his cousin Sandra Jones of Kingston Springs, Tenn.

As a child, David lived in Brunswick, Maine and Yellow Springs. He enrolled at Ohio University and received a B.A. in 1966 in still photography and an M.F.A. in 1970 in film. During his career at Ohio University, he became a professor of film, director of the film department and a media developer for the university’s administration and the College of Business. During these years, he also served as director of photography on two feature films, “Spring Night, Summer Night” and “America First,” and was director and held other positions on several feature documentaries including “Going Back to Limestone,” “Lucy in Disguise” and “Hope Makes the Difference.”

In 1992 he taught media production and photojournalism as a Fulbright fellow at Harare Polytechnic, a college in Zimbabwe. His students included young persons who had escaped the apartheid regime in South Africa, some of whom phoned him long distance when they returned and exercised their vote for the first time.

After 30 years of academic and administrative service at Ohio University, David became professor emeritus in 2000. He then expanded his lifelong engagement with scientific inquiry and image-making to form his own consulting company with Bonnie. He also became a partner in Onyx Scientific, a company that cultivates emergent imaging, information and environmental technologies to become mainstream products with American and international markets. He was a lifelong member of the Society of Motion Picture and Television Engineers (SMPTE). David’s multi-disciplinary vision helped to bridge the world of academics with the product development, training and communication needs of the world of business.

He was deeply loved and will be missed by his wife, son, many friends and former students. No formal funeral services will be conducted. A memorial celebration of David’s life and service to students and the arts will be held July 11, at 1 p.m., at the Athens Dairy Barn Arts Center in Athens, Ohio.