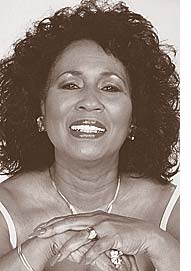 Maxine Ophelia (Pritchett) Jones; elegant, beautiful, stellar in dress and style, accomplished in business, a refined world citizen and a Yellow Springs icon, died on Saturday, May 2. Throughout the weekend she was surrounded by a host of family and friends who came to say “goodbye” to the woman they loved and admired.

Oh what a day! Maxine was born in Yellow Springs on December 7, 1926 to Lauretta (Dunbar) and Rudd Pritchett (both deceased). She was the fourth generation of seven to reside in Yellow Springs (a datum that Maxine took great pride in). Her grandfather, Fielding Dunbar, bought his first property in the area only 18 years out of slavery. Maxine would often drive her family around pointing out the many lots in town and the surrounding areas that were purchased by her grandfather (who never learned how to read or write, and could only sign his name with an “X”). Maxine graduated from Bryan High School (now known as the “Bryan Center”) in 1944. And she had the distinct honor of being the first employee at Vernay Laboratories when it was still located on the Antioch College campus.

On December 7, 1947, she married Jacob Jones Jr. (deceased), and she is survived by their two daughters, Jalyn Quinn (Roe) and Gayla Perrease Jones. Her dream in 1957 when her youngest daughter was born was to travel to Paris, France, “Gay Paris” she use to say. And the name “Gayla Perrease” was chosen for her baby girl to make sure she would never forget her dream. Maxine would travel abroad many times throughout her life — yes, including Paris in the spring — but she was always joyful to return home to her beloved village.

Maxine was ahead of her time in fashion, childrearing, health, you name it! Julia Bozzo said, “I remember Maxine fondly. I’ll never forget her visiting our junior high school and telling us to “eat yogurt.” I was blown away at how glamorous she was [and for the record, nobody ate yogurt back then].”

Maxine is also survived by her son-in-law of 43 years, Steven Roe, Sr. who served as her focal caregiver during the last few months of her life. Her only grandchild, Pastor Steven Roe, II was the love of her life! And she eagerly opened her home to Steven and his wife, Heidi, when they wanted to move from California to Yellow Springs. She took extreme pride in her four great-grandchildren, who she had poured into over the years with oral stories of the ‘family Yellow Springs history’: Jacob (20), Michaela (19), Jalyn Sue (17), and Mariah (16) will miss her life-lessons. Heidi Roe shared the story of when she first came to Yellow Springs and met her “grandmother Maxine”; she thought this lady was a “celebrity” because as Heidi put it, “everyone in town knew her! And people would constantly stop her on the street just to say hello!” Maxine was always gracious, would never rush a conversation or encounter; and she never met a stranger. Patricia Peters wrote, “every time I saw her, I told her she was the most beautiful woman in Yellow Springs!”

Amazing, beautiful, special, effervescent, inspirational, wonderful, incredible, glamourous, a treasure, were just a few of the words often used to describe Maxine O. Jones, as well as kind-hearted. Maxine would open her home to many over the years. To anyone needing a helping hand, she would extend hers. Teri Wilke shares, “Maxine [was] such an amazing woman to me. She changed my life and now I change at-risk kids’ lives. They all know the legacy of Mrs. Maxine Jones as my inspiration to help kids in need. I even foster them. I am so grateful to have [had her] in my life and heart.” Her niece Martina Mabra wrote in her bedside journal, “You’ve brought a lot of joy in my life over the years … thank you for loving me.”

In the late 70s, Maxine worked at the Yellow Springs Bookplate where she met Elias ‘Al’ Neff (deceased). They became quite the diverse couple around town, who by their opposite personas, delighted in turning the head of the inquisitive by-stander. Maxine was no doubt a “statement maker.” Al’s daughter Vicki Morgan wrote, “You have left your mark on this earth, and Lee and I (and certainly Al) are much better folks for having you in our lives.”

What fun! Grammy-Award winning artist Billy Paul dedicated his hit song “Me and Mrs. Jones” to Maxine when it was at the top of the charts. Paul met Maxine while on tour performing at Central State University and although the song was not written about her, Maxine became somewhat of a “local legend” because of it. Gina Benning  wrote “I remember my mom making alterations for the dress she wore that night [to the “Me & Mrs. Jones” dedication concert]. I was in awe of the gold sequins. I remember thinking I want to be able to have someplace to go to wear a dress like that!”

Maxine was an astute business woman, owning three establishments with her husband during the 1960’s here in Yellow Spring; the ‘Party Pantry’ carryout (known as Jake’s Place);  the ‘MaJaGa’ (which was named after Maxine, Jalyn, Gayla), and the Pizza King restaurant (she and her husband were the first black franchise owners of a Cassano’s Pizza). They also owned and operated two establishments in Nassau, Bahamas.

Maxine had a lifelong love affair with modeling, acting, and the theatre. And oh, did she love to dance! Tony Dallas wrote recently to Maxine’s daughter, “I remember your mother as a sharp, stunningly beautiful lady. Both of your parents turned heads. She played Ruth Younger in my father’s production of “A Raisin in the Sun.” I don’t know if that was my first time seeing your mother. I do remember the production deeply affected me. I feel Maxine’s presence as I write [and] the warmth of her smile.”

Maxine excelled at making all who she came in contact with feel valued. Susan Hyde wrote in one of the countless cards she sent, “I want you to know how much I enjoyed our time together as you shared your love and stories of your family and Antioch and Yellow Springs. It means a lot to me and I will cherish those times always.”

In her 70s, Maxine Jones was baptized in Jesus’ name and filled with His Holy Spirit according to Act 2:38. She attended All Nations Apostolic Church, in Springfield, pastored by her grandson Steven. Pastor Koogler acknowledges: “Thankful to know Sis. Maxine Jones. I remember the day she received the Holy Ghost with the evidence of speaking in tongues as the Spirit gave the utterance. It was my honor to have baptized her in the only saving name of Jesus. To God be the glory!”

She marched with Dr. King, and hobnobbed with Hollywood’s finest. But in her later years Maxine took great joy in watching time and people pass by as she sat on her front porch. For many, seeing her sitting there marked the official start of the spring season  — smile. Friends and strangers alike would often stop their hurried walk to come and sit a little while just to enjoy being in her presence. Her neighbor Linda Rudawski shares, “Last summer, my friend Maxine and I chatted on her porch and we made a pretty detailed plan to do some water ballet in the Wellness Center’s pool; Lipstick and all  — lol.  I loved our visits. I live nearby so I could see the constant activity between her on that porch and so many passing by on Livermore. I am saddened that I won’t be seeing her on her porch, waving to all the people passing by, as pretty as a beauty queen in a parade. Saddened that I won’t be hearing everyone chuckle as they went on their way because they were gifted by a fun observation or whimsical wisdom that she shared. I loved Maxine.”

Maxine leaves a host of cousins, nieces and nephews; lifelong friends, co-workers and admirers. In lieu of flowers, the family asks that you make a donation to the “Community Empowerment Organization” (C.E.O.) a nonprofit organization founded by the Jones, Roe and Messenger families to help underserved communities. Maxine helped, taught and mentored thousands during her life and through this organization she will continue. Go to: GoFundMe.com/u6q34g or mail to C.E.O. c/o Heidi Roe, 619 Brubaker Drive, Kettering Ohio, 45429.

The family would also like to thank Dorothy Allen, Irene Bell and Susan Hyde for their daily visits to comfort their friend; the Yellow Springs Senior Center for their wonderful classes she would attend; Lynn Hardman and Curves, because she truly was the “Curves Cop!”; Kristy Fickert from Green County Council on Aging; Kendall Messenger and Sandra Edwards, who were always “on call” to help; Katie Spencer, who made it possible for her to end her life where it began, in the village she loved; the entire Friends Care Community staff who took great care of her while she was there in the last 45 days of her life; her outstanding caregivers, “The A Team,” Elizabeth Sue Watts, her senior companion, and Ruth Peterson; the members of All Nations Apostolic Church; Crossroads Hospice; and for all the magnificent “posts” on social media  — it’s been great reading!

Finally, we thank Julie Steinhilber, who might have summed it up best  —“Great Life, Great Lady, and what a wonderful legacy!”

The family invites you to a “Celebrating the Life, Love and Legacy of Maxine Jones” service and gathering. It will be held at her alma mater, the Bryan Center, 100 Dayton St. downtown Yellow Springs, on Saturday, May 30, 1-5 p.m., a formal presentation will start at 2 p.m. Bring your “Maxine Jones stories” and a finger-food dish to share.