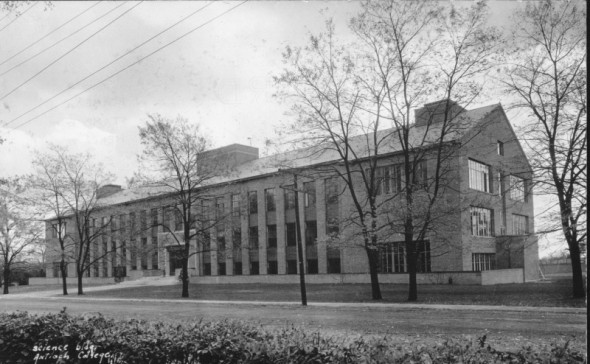 The Antioch College Science Building, built in 1930. (photo from the Council of Independent Colleges)

Westcott Center for Architecture + Design kicks off its 12th Summer Tour Series this Memorial Day weekend with a walk about Ferncliff Cemetery, Saturday, May 23, at 10 a.m. Led by architects, curators, historians, and local professionals, the summer tours examine the architecture, design, and history of the built environment in the Greater Springfield Region. Of the 17 tours scheduled for 2015, the final tour on Aug. 29 is an architectural investigation of the Antioch College campus.

The Summer Tour Series includes Neighborhood Walking Tours, Happy Hour Tours, Bicycle Tours, Site Tours through limited-access community landmarks, and Walking Tours Plus which include access through several private interiors. The tour will hit a spot nearly every week throughout the summer, including on June 6 Westchester Park, a neighborhood platted in 1953 on rolling hills with architect-designed modern mid-century homes by Phil Snyder, Jack Kline and two show-homes by Better Homes and Gardens magazine; Hills and Dales’ order by mail Sears kit houses on June 13; Mast Mansion or Castle Knoll on July 1; and downtown modern art on Aug. 26.

Finally, the Antioch Modern tour will wrap up the season’s events. Sponsored by Kevin Rose and Marta Wojcik, and led by Rose and Antioch Archivist Scott Sanders, the tour will start in 1944. That year, according to the Westcott press release, “Antioch College hired the celebrated architectural firm of Saarinen & Swanson to envision a modern campus that could meet the demands of increased enrollment following World War II. Over the next decade, amid the backdrop of the Red Scare and McCarthyism, Antioch reshaped its campus into a bastion of avant-garde design. Join us as we examine the modernist landmarks that fill this picturesque campus, including designs by Eero Saarinen and Skidmore, Owings & Merrill.”