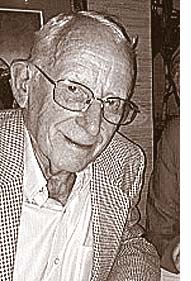 Howard was born Feb. 26, 1922 in Clyde, Ohio, to Carl Vincent and Clara Louise (Comstock) Smith. He graduated from York High School in 1940, and earned his Doctorate of Veterinary Medicine from the Ohio State University in 1944. He was self-employed as a veterinarian for 40 years, retiring in 1985. Howard was a 70-year member of First Presbyterian Church in Yellow Springs, and was a lifelong member of the American Veterinary Medical Society and the Ohio State Veterinary Medical Society. He was also a member of the Mayflower Society and the Ohio Genealogical Society. He was a former member of the Lions Club, and the former treasurer and co-chairman of the Yellow Springs Little League.

Howard is survived by his wife of 70 years, Phyllis Decker Smith, with whom he spent more than 35 years wintering in Ft. Myers Beach, Fla. Among his hobbies were golf, shuffleboard, gardening and traveling.