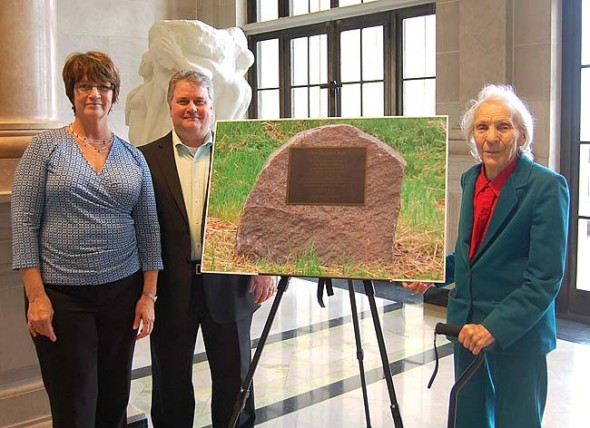 Last week, the Dayton Art Institute honored John and his contribution to the arts community by dedicating its new well as The Eastman Well. (Submitted photo)

By Mindy Cooper and Kim Messer

No one exemplified the community spirit of Yellow Springs better than the late Dr. John Eastman, who spent his life as an involved citizen, serving as a consultant on many community water projects, as a Miami Township Trustee and as a board member of the Friends Care Center.

Last week, the Dayton Art Institute honored John and his contribution to the arts community by dedicating its new well as The Eastman Well. The well provided a solution to a critical issue the museum was having with maintaining the optimum temperature for its art collections. Dr. Eastman passed away suddenly on December 28, 2014 — before the well was completed in April.

“Members of our Facilities Committee recommended that we talk to Dr. John Eastman because he was an expert on water wells and the Dayton aquifer,” explained Mr. David Birch, facilities manager for the museum, “His advice to drill a second well was absolutely critical to the museum. We wanted to honor him for helping us with this decision that will support the museum, not just now, but for years to come.”

The well is now marked with a large rock and a plaque honoring Dr. Eastman. Mr. Birch, as well as Mr. Michael Roediger, director and CEO of the Art Institute, and Mr. Rod Sommer, CEO of LJB Inc., spoke at the dedication event at the Dayton Art Institute. John’s widow, Terri Eastman; his mother “Billie” Eastman; his sister-in-law Heidi; as well as many former co-workers and clients attended the ceremony.