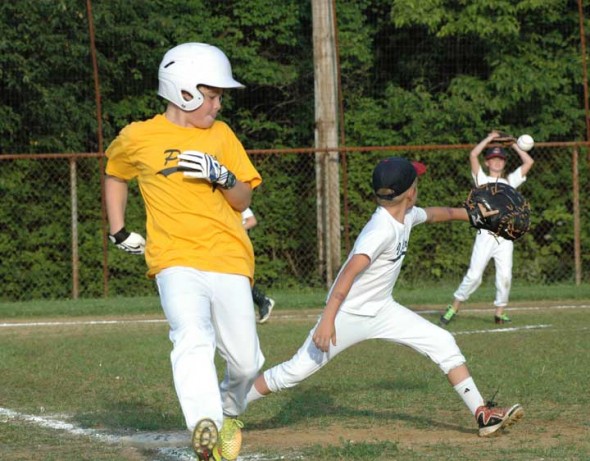 Rain and baseball is never a good combination, and that continues to be the case with the local recreation leagues. All Major League games last week were again rained out. Minor League managed to play three of five games — two were wins by the Winds Cafe Indians, who extended their record to 9–1 and sealed the 2015 regular season championship.

The Indians met the Tom’s Market Pirates on Thursday, July 16, and came away with a 7–3 win. They led the entire game after going up 3–0 in the first inning. Krishan Miller’s left-field triple knocked in Isaac Grushon and Lucas Dunn, who had both singled. Miller then scored on Brother Sam’s RBI single. The Indians added another run in the second when Brady Baker opened with a single and then crossed the plate on Hazen VanMeter’s RBI base hit. Both team’s defenses then stiffened to hold each other scoreless until the final inning, when Ava Schell’s double to left knocked in Sam Miller for the Indians. Schell and Jaymon Reinscheld then both scored when Brady Baker reached base on a fielder’s choice. The Tom’s Market Pirates mounted a rally in the bottom of the fifth that saw Jason Knemeyer score on an RBI single by Zoe Hamilton, who then scored, along with Jason Knemeyer, on Marissa Goodman’s base hit. Ava Schell snagged Teddy Hamilton’s two out fly ball to seal the win. Goodman and Knemeyer both went 2–2 at the plate with Goodman adding two RBIs.

The Winds Cafe Indians recorded their second win of the week by overpowering the Vintage Truck Dragons 9–3 in the first game on Saturday, July 17. The game was close early after the Indians jumped out to a 2–0 lead when Jaymon Reinscheld reached on a fielder’s choice that also resulted in both Lucas Dunn and Krishan Miller crossing the plate. The Dragons responded with a pair of their own runs when Josh Clark opened with a base hit and then scored on Luka Sage-Frabotta’s single, followed by Ryan Scott’s RBI ground out that scored Gabby Perkins. The Indians added another run in the third when Sam Miller scored on Joslyn Herring’s RBI base hit to right, to which the Dragons again responded when Antonio Chatin singled and then scored off Ruthie Myers’ RBI ground out to tie the game at 3–3 after two innings. The Indians then exploded with a five-run third inning on RBI singles by Isaac Grushon and Krishan Miller and a three-run triple by Jaymon Reinscheld. Sam Miller opened the fourth with a base hit then scored again on Hazen VanMeter’s RBI single. The Indians defense held the Dragons scoreless the rest of the game.

The Tom’s Market Pirates rebounded from the week’s earlier loss by taking a 6–2 win over the Peach’s Reds in Saturday’s second game. The Reds took an early first inning lead thanks to base hits from Tallis Onfroy-Curley and Jake Ortiz-Thornton, who scored on Max Lugo’s RBI double. The Reds added another run in the second when Sophia Lawson scored on Areya Harker’s RBI single. The Pirates then took the lead for good in the third, scoring six runs on RBI singles from Zoe Hamilton, Ben Espinosa, Marissa Goodman and Malcolm Blunt, along with a two-run double by Ethan Knemeyer that plated Espinosa and Jason Knemeyer.

The regular season’s final game will take place Saturday at 10 a.m. when the Vintage Truck Dragons and the Tom’s Market Pirates face off. The post season tournament then opens on Monday, July 27, at 7 p.m., when the Wind’s Cafe Indians take on the fourth-place team, followed by the second and third place teams facing off at 7 p.m. on Wednesday, July 29. The winners of these two games will then play for the championship on Thursday, July 30, at 7 p.m.

See the league website at http://www.leaguelineup.com/ysoyouthbb for the latest updated schedules, results and player statistics.