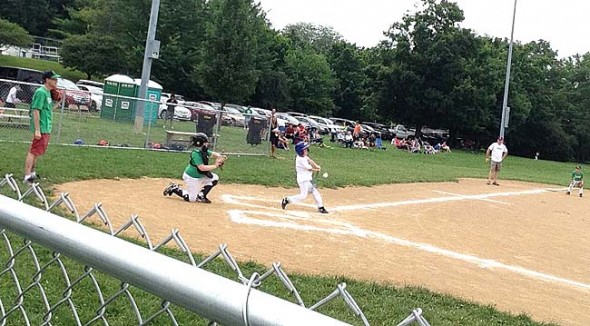 In the Minor League, the Winds Cafe Indians narrowly beat the Peach’s Reds 9-7 on Wednesday, July 1. Shown above, Lucas Dunn of the Indians with a hit against the Vintage Truck Dragons. (Photo by Lauren Heaton)

Despite suffering their first loss, the Winds Cafe Indians remain atop the Minor League standings midway through the 2015 season.

The Indians almost lost at the hands of the Peach’s Reds in the first game of a double-header on Wednesday, July 1, but survived a late rally to escape with a 9–7 victory. The Reds jumped out to an early 2–0 lead in the top of the first when Tallis Onfroy-Curley’s base hit ignited the offense. He eventually scored on a Carina Basora base hit and Lily Rainey’s RBI single that sent Cal Freeman across the plate. The Indians got on the board in the bottom of the second when rookie Jaymon Rheinscheld scored on a Hazen VanMeter base hit to center. They added five more runs in the third to take the lead for good on a Joslyn Herring RBI double, three singles, and an RBI triple by Lucas Dunn. The Reds mounted a fourth inning rally, scoring a pair of runs on a Max Lugo double to close their deficit to 6–5. But it didn’t take long for the Indians to answer as they scored three runs of their own in the fourth. Lucas Dunn smashed a two-run double, scoring Isaac Grushon and Aiden Scavone and Jaymon Rheinscheld’s RBI single scored Herring. The Peach’s Reds mounted another rally in the fifth when Areya Harker scored on a center field double by Anthony Mascola who then scored on a Tallis Onfroy-Curley RBI ground out. But the Winds Café Indians defense held on for the last out to seal the 9–7 win.

Wednesday’s second game saw the Tom’s Market Pirates survive a Vintage Truck Dragons rally and hang on for a 3–2 victory. The Dragons took an early 2–0 lead when Liam McClean doubled and then scored on a Josh Clark base hit in the top of the first. They added another run in the second when Kellen Scott tripled to right, scoring Sam Linden. The Pirates responded with a run of their own in the second when Marissa Goodman scored on an RBI single by Sebastian Thompson. Noah VanHoose’s RBI line drive in the bottom of the third then scored Ben Espinosa to tie the game at 2–2. The tie lasted until the Pirate’s last at bat in the bottom of the fifth when, with two outs, Scout Espinosa’s RBI single scored Thompson for the winning run.

The bats were busy Sunday for the week’s final game, and when the dust cleared the Vintage Truck Dragons handed the Winds Cafe Indians their first loss of the season, 12–10 in a contest where the teams combined for 42 hits, including nine extra base hits. The usual stellar Indians defense was absent and their offense was likewise unable to overcome a seven-run third inning deficit. The Dragons jumped out to an early 4–0 lead when Liam McClean singled and eventual scored off a Ryan Scott RBI single. Luka Sage-Frabotta then scored on an Antonio Chatin base hit, followed by a Lucas Price RBI double that plated Scott and an Owen Beitenhaus single that scored Chatin. The Indians answered with four runs of their own in the first on a two-run double by Lucas Dunn, an RBI single by Hazen VanMeter, and an RBI single by Camilla Dallas-Gonzalez. The Dragons went up for good in the second, scoring four runs on an RBI single by McClean to score Gabrielle Perkins, and a two-run triple by Ryan Scott that scored McClean and Sage-Frabotta. The Dragons added three more runs in the top of the third, on a Ruthie Meyers double, a throwing error that allowed Gabrielle Perkins to score, a Luka Sage-Frabotta RBI single that scored McClean after his base hit and an Owen Beitenhaus single that scored Sage-Frabotta. The Indians could only manage a single run in response when Dunn scored on Jaymon Rheinscheld’s left field RBI double, while the Dragons added one more in the top of the fifth when Sage-Frabotta scored on Chatin’s RBI single. The Indians last at bat resulted in an impressive rally that still fell short. With the winning run at first, the Dragons’ defense stiffened and held on for the win.

The Winds Cafe Indians remain in first place with a record of 5–2, followed by the Vintage Truck Dragons at 3–2, the Tom’s Market Pirates at 1–3 and the Peach’s Reds at 1–4.

Recent Major League play will be covered in next week’s summary.

Minor League games are scheduled for 10 and 11:45 a.m. on Saturday mornings and 7 p.m. Monday and Wednesday evenings at Gaunt Park. Attempts are being made to reschedule all games postponed because of the weather and/or unplayable fields. Major League games are scheduled for Sundays at 5 p.m. and Wednesdays at 6 p.m.. See the league website at http://www.leaguelineup.com/ysoyouthbb for the latest updated schedules, results and player statistics.