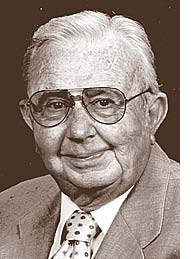 Lloyd passed away peacefully to heaven, at the age of 93, with his family members surrounding him at the Oak Grove Nursing Care Facility in Deshler, Ohio. Lloyd was a 44-year resident of Pitchin, Ohio, and faithful and active 33-year member at Southgate Baptist Church in Springfield. Lloyd was born Feb. 12, 1922, on his family’s farm in Tipp City, Ohio, to Frank and Mary (Young) Benham. He was the fourth born of six children. He attended Tipp-Elizabeth schools and Miami University before he married Martha (Anderson) of Cedarville, Ohio, on Jan. 10, 1944. Soon after their wedding in California, Lloyd boarded a ship to the South Pacific with the 1st Marine Division where he fought in the WWII battles of Peleliu and Okinawa, also serving as a Marine in China after the surrender. Returning home, Lloyd and Martha had three children.

Lloyd graduated from Miami University with an MA in education and taught school and coached sports in Yellow Springs (1947–1955). He was high school principal in Hudson, Ohio(1955–1968), superintendent of schools in Yellow Springs, (1968–1973), headmaster of The American School of Kinshasa, Zaire (1973–1975), and intermediate school principal in South Charleston, Ohio (1975-1978) before retiring from the Ohio school system. As his final administrative assignment, he worked as the high school principal of the Graded School in São Paulo, Brazil (1978–1981).

Lloyd was preceded in death by his beloved wife of 69 years, Martha (2013), and his five siblings. He is survived by his three children: Gerald L. (Jane) Benham, of Pitchin, Martha E. (Richard) Betts, of Deshler, Ohio, and Susan K. (Thomas) Baron, of Maineville, Ohio; seven grandchildren and four great-grandchildren.

A gathering of family and friends will be held on Saturday, Aug. 8, 4–5 p.m., at Southgate Baptist Church, located at 2111 S. Center Blvd., Springfield, where the memorial service will follow to celebrate Lloyd’s life at 5 p.m. A private burial will be held in Clifton Cemetery.