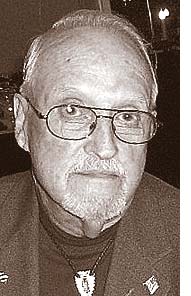 He was born at “The Homeplace” in Yellow Springs on Sept. 28, 1932 to the late John Robert and Mary Alice (Linson) Phillips. In addition to his parents, Richard is reunited with his beloved wife of 61 years, Thelma F. Phillips; his brothers, Robert and William as well as sisters, Maxine, Norma and Marjorie; and granddaughter Robyn Taylor. Richard leaves behind to cherish his memory, his five daughters: Patti Taylor, of Fairborn; Mary (Craig) Conrad, of Yellow Springs; Teresa Phillips (Mike Burchett) of Fairborn, Pamela (Warren) Hensley, of Fairborn; and Roberta (Jim) Semler, of Yellow Springs; ten grandchildren, Tom Taylor, Debbie Thompson, Michael and Dustin Granger, Aaron Pitstick, Tyler and Jason Hensley, Heather, Kristen and Anna Semler; nine great grandchildren, Kaitlyn and Emma Taylor, Makenna, Luke and Kaleigha Granger, Rylee and Carter Hensley, Daylea Thompson and Grayson Pitstick; as well as numerous nieces and nephews and many close friends.

Richard served his country in the United States Army during the Korean Conflict, and retired after 32 years of dedicated service from Vernay Laboratories in 1985. Richard was his happiest while out in his shop tinkering with things and creating wooden toys which he perfected over the years. His hands were always busy and his heart was full of love for his family.

The family of Mr. Phillips would like to thank everyone who helped them through these difficult times, especially the Springfield VA (Scott, Judy, Alison, Deven); and Patty Alexander for bringing communion every week. The family wishes memorial contributions be made to the March of Dimes Foundation in Richard’s memory. Condolences can be forwarded to the family by visiting http://www.jacksonlytle.com