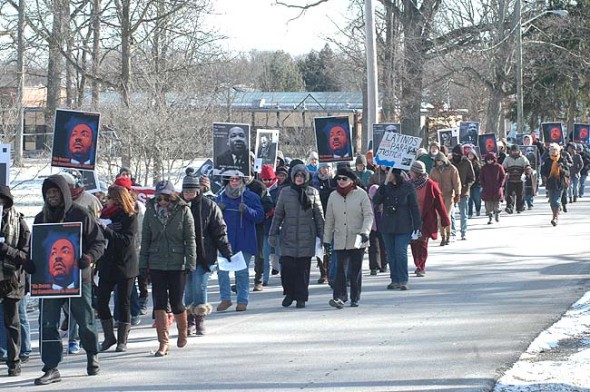 The 2016 MLK Jr. march started out in frigid conditions with fewer than usual marchers. But the following celebration at the Central Chapel AME church warmed up significantly. (Photo by Matt Minde)

The annual parade celebrating the life and work of Dr. Martin Luther King Jr. began as usual with a march into a colder than usual January morning.

Marchers wound their way around downtown, up Limestone Street, and funneled into the warmth of the Central Chapel AME Church, where the World House Choir (with rapper Issa Walker), the Booth Family Drummers, and special guest singers The Wilberforce University Gospel Choir heated things up with gospel song.

A spoken word piece, The Urgency of Now, by Columbus State Community College student Frank Brown artfully addressed the violence that African Americans have suffered at the hands of the police in recent years.

Bomani Moyenda emceed the event, and introduced this year’s Peacemaker award, presented to longtime Yellow Springs Schools fixture John Gudgel, for his role in teaching, leading and counseling the village’s students for over 25 years.

After the ceremony, throngs of marchers and participants filed into the meeting hall for hot soup, sandwiches, cookies and fellowship.

Photos of the march and following celebration are by Diane Chiddister and Matt Minde.