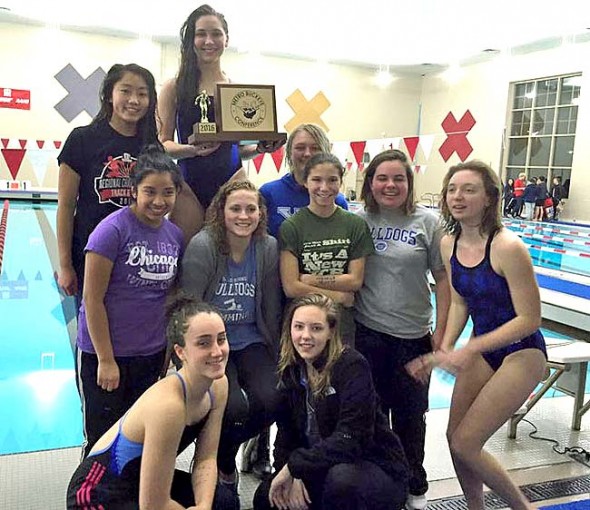 “What a wild and exciting ride it has been,” Coach Hardwick said, summing up the season.

The Bulldog swimmers met and challenged 25 other teams at their sectional tournament meets at Centerville (boys) and Mason (girls) on Friday, Feb. 12, and Saturday, Feb. 13, respectively.

In their final effort for the day, the boys finished seventh in the 400-yard freestyle relay (4:05.83), the team consisting of Burch, Gregor, Walker and Ngqakayi.

Fourteen Bulldog girls participated in the Saturday morning sectionals at Mason, scoring 183 points to finish a strong seventh. Team captain Olivia Chick was the meet’s outstanding swimmer, snagging two place/sectional champ finishes: one in the 200-yard freestyle (1:55.32) and a second in the 100-yard freestyle (53.10). Eden Spriggs made an exceptional effort, finishing sixth and posting a personal record in the 100-yard butterfly (1:06.55) and finishing tenth in the 100-yard backstroke (1:10.73, another personal record).

“The depth of the team was very evident as they put on the steam in the three relays they competed in,” said Coach Hardwick.

Looking ahead, looking back

Accolades are deserved all around, according to Coach Hardwick. Assistant Coach Bradley Martin highlighted the crucial role of parents this season.

“We’d like to thank the parents who made sure their swimmers were at practices and at the meets, along with all the volunteers who have helped time and organize the events,” he said. “Parent involvement is just as much a contribution to this successful year as anything, and made up the backbone of this year’s successful program!”

And Assistant Coach Franklin Halley weighed in with enthusiasm: “I’m super proud of all of this Bulldog swim team! Lots of excitement … and it’s not over yet!”

The Bulldog boys clinched the Metro Buckeye Conference title, finishing with a conference record of 11–1 and an overall record of 16–6. On Saturday, Feb. 20, at 2 p.m., they will play the first game of the state tournament, facing off against Jefferson Township High School at Troy High School. The Bulldogs are third seed in their section of 13 teams.

“It’s been a few years since we won a game in tournament, so we’re looking forward to the opportunity to win a few games,” Coach Steve Grasso said.

Teams have to “win to play,” so he said he couldn’t speculate about games beyond Saturday. “We’re taking them one at a time,” he said.

In addition to emerging as the Metro Buckeye Conference champs, individual players and Coach Grasso himself snagged significant awards. YSHS senior Isaiah Taylor was voted Metro Buckeye Player of the Year by conference coaches, with the best overall play stats. Taylor had a per-game average of about 12 points, nine rebounds, 3.5 blocks and 2.5 assists.

“He had a very nice season,” Coach Grasso said, a delicious understatement.

Coach Grasso was recognized as “co-coach of the year” by the conference, an honor he also earned (as a single recipient) last year.

The Lady Bulldogs played in the state tournament Tuesday, Feb. 16, against Tri-Village High School. Results were not available at press time, but Coach Vance Venesky said on Tuesday morning that the girls “are convinced they’re going to win tonight” — and who was he to challenge them?

The girls have a 2–20 season record, but they’ve won two of their last three games, so momentum is on their side. If they don’t win, the game will be senior Molly Hendrickson’s last, Coach Venesky noted. Tri-Village is an extremely strong team — number four in division four in Ohio, with a season record of 20–3.

In other highlights, Coach Venesky congratulated junior player Elizabeth Smith for scoring her 1,000th point in a recent game against Cedarville.

“We’re very excited for the future,” he said. “We have a young team with freshmen, sophomores and juniors.”