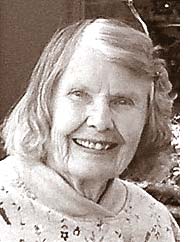 Jean Putnam passed away Jan. 8, 2016, in Warwick, R.I. She was 94 years of age.
She was born Jean Lena Unnewehr in Berea, Ohio, on May 31, 1921, to Ivy Squires Lewis Unnewehr and Emery Carl Unnewehr. Her father was a professor of physics at Baldwin Wallace College in Berea and her mother had grown up on a farm in nearby Columbia, Ohio. Jean attended public schools in Berea with her only brother Lewis Unnewehr.

Over the decades, Jean taught music to hundreds of students, both in public schools and in her home where she taught piano until 2007. She was an accomplished musician throughout her life, directing and participating in choral groups, eight-handed piano groups, playing piano and organ, singing, writing music and hosting dozens of recitals. Jean sang with Coretta Scott King in 1950 at Antioch College, continuing to correspond with her for years. Her beloved husband Harold deeply appreciated her musical talents and career. Jean’s love and devotion to music radiated from her and greatly influenced her family, friends and her many students of all ages.

Both Jean and Harold were deeply committed to world peace, non-violence and civil rights. During one peaceful protest in the early 1950s to support de-segregation of schools in Wilmington, Ohio, she and others were shot at from the County Seat Building. Jean was also committed to nuclear disarmament in the early 1960s during the Cuban missile crisis when the world was perilously close to cataclysmic war. She regularly participated in local and national demonstrations working tirelessly for peace and justice and helped to publish “The Peacemakers” newsletter through the 1950s and 1960s. She compiled a “Songs of Peace and Freedom” singing book, endorsed by Pete Seeger.

In 1967, Jean and her family moved to rural Bath, N.H. for a couple of years, where she remained active in politics, continued singing and playing organ and piano and raising her three children. From 1969 through the mid ’80s, they lived in Melrose, Mass., where Harold worked at Harvard University, and Jean increased her musical pursuits. She started an early music instrumental group, continued to teach, both in the schools and giving private piano lessons, became a member of the Beethoven Society and went back to graduate school. Jean enjoyed studying and obtained a master’s degree in Music from UMASS – Lowell in the early 1980s.

In 1980, Jean and Peg Champney of Yellow Springs founded Friends Music Camp, dedicated to musical growth for young people in an inclusive community informed by Quaker values. This camp has continued to provide a unique and valuable experience for young musicians for over 35 years. Many alumni of the Camp (including Jean’s granddaughter and grand-nephew) have attested to the deep effect the experience has had on their appreciation of music.

Jean was also known for her cheerfulness, positive outlook, and her love of animals and nature. Over the last decade, her love of life and inner strength helped her to cope with the loss of her husband and her long struggle with dementia/Alzheimer’s. Son Mark played music for her during her last years at a nursing home, and Nancy Jean visited her on weekends, helping her with meals, care and companionship. She continued to smile and appreciated new and familiar music until the end of her long life.

A memorial service will be held in Yellow Springs on April 16 in Rockford Chapel.