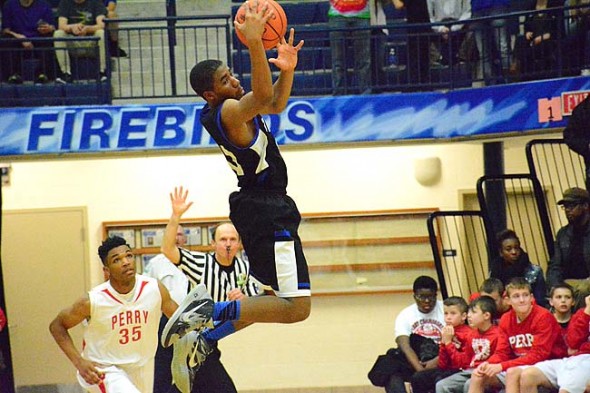 Devon Perry soars as he controls the ball at Tuesday evenings Bulldog 61–43 victory over Lima Perry. (Photo by Daniel Deaton)

Straight from their District IV Championship, the YSHS boys basketball team clinched a 61–43 victory against Lima Perry Commodores Tuesday evening, March 8, in the first of the “Sweet 16” games at Jackson Center at Fairmont’s Trent Arena.

According to Daniel Deaton, photographer at the game for the News, the Bulldogs were “overwhelmed until the half. Lima Perry had the crowd roaring! It just seemed like they couldn’t miss, and Yellow Springs was turning the ball over quite a bit. The Bulldogs regained control in the third quarter; they left Lima Perry behind in the fourth quarter.”

in support of the YSHS boys basketball team’s presence Friday night in the regional tournament, the YSHS musical “Footloose” will not be performed on Friday as scheduled. An extra performance of “Footloose” will take place on Thursday, March 10, at 8 p.m. in the Mills Lawn gym. The play’s Saturday and Sunday schedules will take place as scheduled.

Please return here for updates, details and more of Daniel Deaton’s photos of the game.

View a gallery of Deaton’s photos from the District IV Championship game.