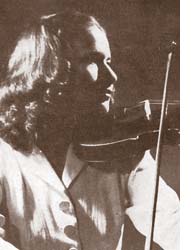 Shirley Wexler died in her home in Yellow Springs on Saturday, Feb. 27, 2016, at age 90. She was a musician, music teacher, visual artist, wife, mother and grandmother.

She was born Shirley Hochstein in Houston, Texas, on Dec. 13, 1925. Her parents were Gershon (Harry) and Rebecca Hochstein. She graduated from San Jacinto High School in Houston in 1945 and left Houston to study violin at the Juilliard School in New York City, from which she graduated in 1951.

In 1953, Shirley returned to Houston for a visit. A mutual friend set her up on a blind date with Seymour Wexler; two weeks later they married. They spent their honeymoon in New York, during which time they packed her belongings to move them to Houston. They lived in Houston until moving to Yellow Springs in 2006.

Concentrating on viola, Shirley performed in the Houston Symphony under conductors Leopold Stokowski and Sir John Barbirolli, and over the years in various string quartets and community orchestras, including those in the cities of Victoria and Baytown, Texas. Soon after arriving in Yellow Springs, Shirley joined the Yellow Springs Chamber Orchestra.

Later in life, she studied art, taking classes at the University of Houston and privately. She created art even after her failing eyesight caused her to stop playing violin and viola.

A chamber music memorial is being planned for April.