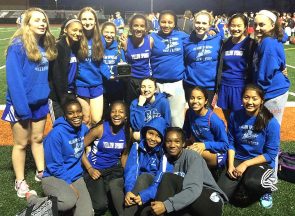 “Morrison had good control and an overpowering fastball in that game,” stated Coach Jimmy DeLong. “She walked the first batter of the game and then really got focused after that.” Indeed, it was her only walk of the game, and the Bulldog offense supported her with 16 hits and 15 stolen bases. Lead-off hitter Kadie Lafferty went 4 for 4 with five stolen bases, and Nekyla Hawkins went 4 for 4. Morrison went 3 for 4 at the plate, with three runs batted in.

The next night the Lady Bulldogs traveled to Ponitz. Lafferty, Morrison, Elly Kumbusky, Gracie Price and Danny Horton all got on base and scored a run. The impressive start proved to be more than enough runs, as Morrison pitched a shut out and led the Bulldogs to an 18–0 win.

“This is the first time in my five years we’ve been able to beat Ponitz,” said DeLong. “We had a tough loss to them last year but this year our team definitely had the edge in all aspects.”

The team banged out 17 hits, including a base-clearing long triple to left center by catcher Horton and Morrison’s deep laser shot double to the outfield. Price was 4 for 4 with four runs scored and Lafferty was 3 for 4 with 3 runs scored and three stolen bases.

The school’s most fleet-footed athletes took to the fields of Waynesville last week, with the girls team taking second place out of 12 schools and the boys tying for fifth.

First place finishes included Dyemeisha Banks’ 200-meter time of 27:12; Julie Roberts in the 300 hurdles with a time of 49:14; and Charlotte Walkey’s 2:32:12 800-meter victory. The 1600 relay team of Walkey, Roberts, Olivia Brintlinger-Conn and Ayanna Madison crushed the competition with a time of 4:20. The 400 relay team of Christina Banks, Dyemeisha Banks, Brintlinger-Conn and Roberts took second in 53:14, and Jasmine Davidson’s 31´11˝ shot-put throw awarded her second as well.

The tennis team has been busy over the last week, playing no less than three games in three days, with a fourth shortly thereafter. The match against “tennis powerhouse” Miami Valley resulted in their second loss of the season, though the Bulldogs emerged victorious from their tangle with Cedarville last week, with Augie Knemeyer having a big win in his singles match and the gruesome twosome teams of Dylan Dietrich/Kasey Linkhart and Henry Potts-Rubin/Meredith Rowe smiting the competition. The Bulldogs were not successful against Dayton Christian, bringing their record to 4–2.

Win or lose, the tennis players have a reputation for their conduct.

“Every coach and parent compliments the players’ sportsmanship and attitude,” said coach Donna Silvert. “They are strong atheletes who are working hard, and they’re always very respectful of the game and the facilities.”

Baseball coverage will pick up next week with game reports and photos.