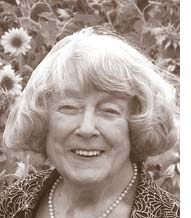 Althea Irene Rozeboom (Smith), 96, of Springfield, died May 2. Althea was born on June 19, 1919, in Allentown, Pennsylvania, the first child of Charles and Irene Smith. Althea met her husband-to-be when her cousin brought his classmate, John Rozeboom, to a Thanksgiving dinner. They were married on December 19th, 1941.

Althea and John lived in several New Jersey towns where John pastored while finishing his divinity degree from Drew Seminary. Their two daughters, Dianne and Althea (Kit), were born in New Jersey. The family moved to Detroit in 1950 and to Flint in 1953. There, Althea brought puppetry to Flint school children through the Mott Foundation Children’s Theater Program. In addition, she and her daughters formed their own travelling puppetry troupe, The Rozeboom Puppeteers. Althea also worked closely with John to develop educational materials for family life within the Methodist Church. She completed a degree in Education at the University of Michigan and taught in the Saginaw Public Schools. In 1976, when John accepted a position as pastor of the Bethany United Methodist Church in Clio, Michigan, Althea retired from teaching and developed several programs within the church, including liturgical dance, youth-focused after-school programs and World Hunger Outreach.

When John retired in 1981, he and Althea moved to Midland, Michigan, where Althea became a docent and developed a youth-oriented volunteer program for the Midland Arts Council. In recognition of her contributions, the Arts Council named an annual award after her: The Althea Rozeboom Volunteer Award. She was its first recipient. During this time she also studied and taught Tai Chi. In 2001, she and John moved to Oakwood Village in Springfield, Ohio, to be closer to family. Althea is survived by her daughters, Dianne Collinson and Kit Crawford; and her sister, Marian, of Allentown, Pa.; three grandchildren and their spouses; and seven great grandchildren. Visitation was held on Friday, May 6, at Littleton & Rue Funeral Home in Springfield. Burial followed at Massey Creek Cemetery in Cedarville.