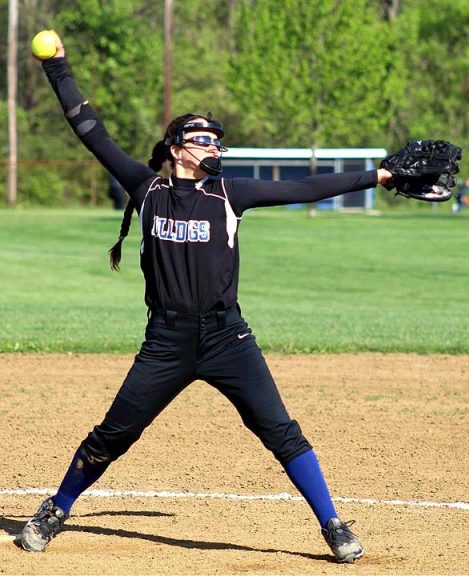 The Lady Bulldogs played their final game of the season last week, hosting Twin Valley South in a sectional tournament game at Gaunt Park. The Bulldogs earned the right to host the game by gaining the #4 seed in their sectional. After two scoreless innings, Twin Valley South broke through with 2 runs in the 3rd inning and 3 runs in the 4th inning to take a 5–0 lead. They pulled away from the Bulldogs in the 5th, winning by a final score of 12–0.

The game was a lot closer than the final score indicated. Twin Valley South only had 3 earned runs for the game, and the Lady Bulldogs left 10 base runners stranded on the bases.

“I told the girls after the game that we lost to a good team today, but I also told them we were as good as that team,” said Coach Jimmy DeLong. “The girls had the tournament jitters. For the first time all year, our team was tense out there and they made some mental mistakes they don’t usually make.”

Pitcher Hannah Morrison pitched a complete game and struck out 13 in five innings of work to finish the season with an outstanding 154 strikeouts in 76 innings pitched. Offensive stars for the game were Elly Kumbusky, who was 2 for 2; Kallyn Buckenmyer, who was 2 for 3; Danny Horton, who was 1 for 2; and Nekyla Hawkins, who was 1 for 2.

“Our offense did their job today,” observed DeLong. “Base running mistakes hurt us, but the girls once again hustled and gave it full effort, and we had what I call ‘teaching moments’ out there today, which will help us for next year.” Defensive play of the day belonged to left fielder Victoria Willis, who made a sprinting catch of a sky-scraping fly ball hit down the left field line.

The loss ended a Lady Bulldogs’ season in which they were Metro Buckeye Conference co-champions with Middletown Christian.

According to DeLong, “Both the girls and the coaches are already looking forward for next season to begin.” This season’s team was young; expect an exciting encore next year.

In last week’s sports report, the News lauded pitcher Jonathan “JT” Clark, a senior, while unfortunately misstating his name. Let the corrected record show that it was JT Clark who displayed incredible resilience, pitching with the team despite a cast on one arm. And let the record also show that last week, Clark took resilience to a new level, actually cutting off his cast himself — kids, please don’t try this at home — after being told by his doctor he wouldn’t have the cast removed in time for the May 9 tourney game against Mississinawa Valley.

Clark pitched a complete game with only one earned run, according to Coach Ben Cooper. “It was a pretty dominant performance,” Cooper said. ” The rest of the runs were on errors, “a big problem for us this year,” he conceded.

Despite the valiant efforts of Clark and teammates, undertaken in last Monday’s cold, steady rain, the Bulldogs lost to Mississinawa Valley, 5–3. It was a “tough loss,” said Cooper, and “some of them took it harder than others.” The team reviewed the season on the way home.

“Pitching was very good this year,” said Cooper. “Batting started slow but got as good as any team in the league” as the season progressed. “We lost games on defensive errors.”

Other teammates will be recognized at the upcoming spring sports banquet, held at the YSHS gym on Thursday, May 19, 7–8:30 p.m. This banquet is for all spring sports.

The Bulldog tennis team had its most successful showing in many years at last Tuesday’s sectional tournament. Gabe Day, Peter Day, Meredith Rowe, Henry Potts-Rubin, Kasey Linkhart and Dylan Dietrich had “big wins” before exiting the rounds, said Coach Donna Silvert. Junior Augie Knemeyer prevailed, she added, losing only one game in three rounds, the last at the end of a long day. He showed “amazing focus and fortitude,” she said.

Knemeyer advanced to the Southwest District Tournament, one of only three “Yellow Springs stars” who have accomplished this in the past 15 years, according to Silvert. “He exceeded expectations,” she said. “He was 4th seed and came out 3rd.” On Wednesday, May 18, Knemeyer played a Chaminade Julienne player at Centerville High School. The results of that face-off will be reported in next week’s paper.

“Augie is an awesome young man,” Silvert enthused this week. “He’s an exemplary sportsman with a lot of skill and a lot of guts on the court.” Silvert praised his “great family,” and highlighted the crucial role of a “really supportive” community.

“All the adults that have helped with the team — that goes a long way,” she said.

The girls track team won the Metro Buckeye Conference League Championship for the first time since 2000, competing this past Saturday, May 14, at home in cold, rainy and windy conditions. The Lady Bulldogs scored 160 points to outdistance runner-up Xenia Christian. A number of Lady Bulldogs earned all-league honors as a result of their first-place finishes:

Coach Isabelle Dierauer was selected as the Metro Buckeye Conference Girls Coach of the Year.

“All 20 girls on the squad contributed in a meaningful way to the victory,” she said.

For their part, the boys finished in third place as a team with a limited squad of only 10 members. Earning all-honors for their first-place finishes were Kaner Butler, a double victor in both 110 and 300 hurdles; Oluka Okia in high jump; and Joe Plumer in long jump. Plumer also earned second place in high jump. And in third place were Aaron Sherwood, 100 meters; Okia, pole vault; and Butler, Plumer, Noah Krier and Jonah Trillana, 1600 meter relay.

The Bulldogs competed in the district meet on Tuesday, May 17, and will compete again on Saturday, May 21, at Welcome Stadium; they go on to regional competition next week, May 25 and 27, at Troy.