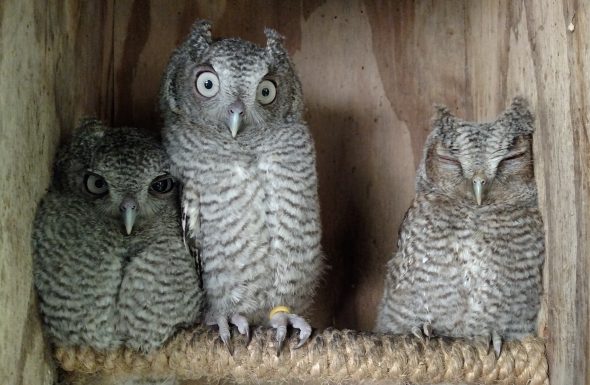 Young screech owls will be released back to the wild this Thursday, June 23. (Submitted photo)

Back to the wild — Raptor Center owl release

If you hear something eerie in the air at night, it just might be a screech owl. Screech owls are fairly common in Ohio, but they’re heard far more often than they’re seen. Masters of disguise, screen owls come in two different color “morphs,” grey and reddish-brown, which allow them to blend expertly into the trees.

But this Thursday, June 23, you can hear and see these owls, which are distinctive for their ear tufts and large yellow eyes. Glen Helen Raptor Center will be releasing young screech owls back to the wild at the School Forest Meadow from 8 to 9 p.m. The event is free; donations made online or at the event are appreciated. Tarps or blankets to sit on are recommended.

The Raptor Center’s periodic releases of raptors — birds of prey, including owls, hawks, eagles and falcons — culminate weeks or months of on-site care for injured birds. In previous interviews, the Raptor Center has said it handles up to 200 birds of prey a year. Release events are celebrations of success — and tributes to the resilience of all spirits, avian and human alike.