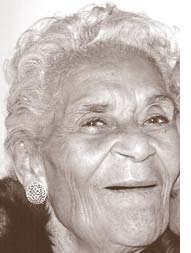 Eloise E. (Webber) Hamilton, of Yellow Springs, passed away on June 14, 2016, at Friends Care Community in Yellow Springs. She was 94.

Eloise was born on Dec. 7, 1921 in Columbia, S.C., to the late Edward Reed Webber and Ethel Johnson Webber, who was a strong and loving mother.

Eloise was a woman who will be dearly missed. She greatly cherished her family, friends and her faith. She was a devoted member of Kingdom Hall of Jehovah Witnesses congregation in Xenia and Springfield. We thank Jehovah for her long life.

She was preceded in death by her husband Robert H. (Bobby) Hamilton; one son, Larry I. Hamilton; a daughter, Paula Hamilton Carter; her six brothers, Essex, Samuel, Stanley, Vincent, Ulysses and Chappell Webber; one sister Blanche (Webber) Barkes; and one great-grandson, Joshua Hamilton.

She leaves to cherish her memory five daughters, Melva K. (James) Toll, of Thornville, Ohio, Rita D. Shealey,of Springfield, Ohio, Jeretta H. (Terry) Cox, of Monroe, N.C., Vanessa A. (Donald) Bahr, of Partlow, Va., and Veronica L. Hamilton, of Yellow Springs; two sons, Michael G. Hamilton, of London, Ohio, and Mark A. Hamilton, of Yellow Springs; one sister, Ethel (Herbert) Lovett, of Gadsden, S.C.; 18 grandchildren; 28 great-grand children; three great-great-grandchildren; and a host of nieces, nephews cousins and other relatives, as well as her Christian friends, all of whom will miss her dearly.