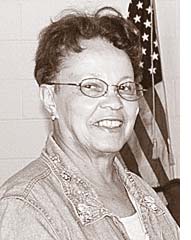 Ernestine Martin-Benning, 87, of Springfield passed away on Wednesday May 25, 2016 in her residence. She was born in the Rhodes Chapel community of Greenville, Ky., the daughter of Herbert Martin and Beatrice (Tutt) Martin.

She retired from Antioch College after 38 years of service.

In the early 1950s she met the love of her life, Charles W. Benning. They were married for 62 long wonderful years. She joined Central Chapel A.M.E. Church in 1956 where she was the administrative assistant to the pastors, a member of the steward and trustee boards. She was also a member of the choir and was a Sunday school teacher. In her retirement years she was a full-time volunteer administrative assistant at Central Chapel A.M.E Church. She was the secretary of Friends for Payne Theological Seminary in Wilberforce, Ohio, and a member of the 150-member Retirement Set of Springfield, Ohio.

Services for Ernestine Benning were held on Wednesday, June 1, at Central Chapel A.M.E. Church, with the Rev. Dwight Smith officiating and the Rev. Dr. John E. Freeman as eulogist. Interment followed at Glen Forest Cemetery in Yellow Springs. Arrangement entrusted to Porter-Qualls-Dunlap Funeral Home. In lieu of flowers, her request is that donations be made to Central A.M.E. Church.