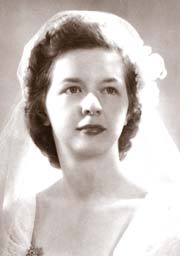 Melva Jane McCuddy died on June 30 at Springfield Regional Medical Center. She was 91.

Melva was born Aug. 13, 1925, in Dickerson Run, Pa., to Walter and Aurelia Van der Hoven. She moved to Newark, Ohio, and graduated from Newark High School in 1943. She attended the Ohio State University, where she was a member of Alpha Phi Sorority and was a news editor on the staff of the Ohio State Lantern. Melva graduated in 1947 with a B.A in journalism and a minor in political science.

After college, she worked at several newspapers including a stint in Clarksville, W.Va., where she covered a particularly violent coal miner’s strike. She finally wound up at the Springfield Sun in Springfield, Ohio, as society editor.

During her time at the Sun, she met and married William E. McCuddy, who was the paper’s photographer. They had three children: William Shaw, James Arden and Jane Ellen Culligan. While she was raising children, she also stayed busy working at the Warder Public Library, the U.S. Census Bureau and for the University of Chicago’s National Opinion Research Center doing social science research.

In later years, Melva was active with Elderly United in Springfield, organizing bus trips to Canada to enable the elderly to affordably purchase prescription drugs. As a result of this activism, she was called to testify before Congress during the debate over the Affordable Care Act. She told them that under the current health care system, America was failing its growing elderly population, leaving needed medications and procedures financially out of reach for many.

Always a big “D” Democrat, she had hoped to live long enough to see a woman elected President of the United States.

Melva is survived by her three children; grandchildren William, Micheala, James William, Caitlin, Eric Castle, Joseph, Megan and Evan Culligan; great-grandchild Tori and a great grandchild due later this summer. A family remembrance is planned at a later date. In lieu of flowers, her wish was for contributions to be made to the Presidential campaign of Hillary Clinton.