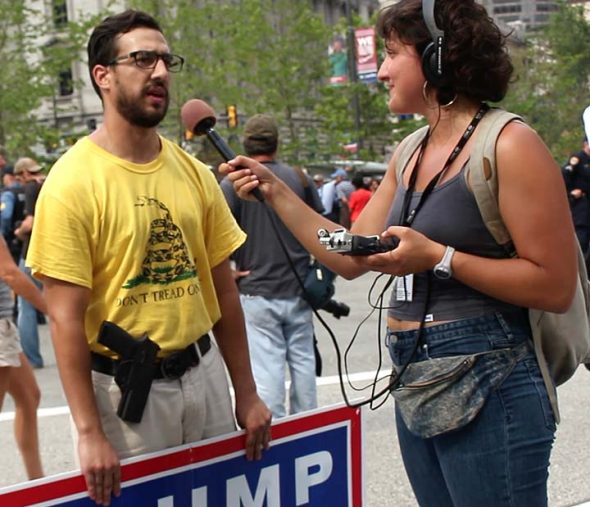 Antioch College student Lillian Burke interviewed an open carry activist at last week’s Republican National Convention in Cleveland. Burke and a number of fellow students went to the convention, where they spoke with activists and attendees of all stripes as part of Professor Charles Fairbanks’ media arts class. (Submitted photo)

On Thursday, Sept. 15, Antioch College media arts students and faculty will present their new documentary “The Elephant In Our Room.” The film, which was recorded at the 2016 Republican National Convention in Cleveland, strives to find something human, timeless and touching behind the facade of political rhetoric.

Inspired by “Four More Years,” a documentary about the 1972 RNC, the film crew, consisting of media arts instructor Professor Charles Fairbanks, adjunct professor and studio arts coordinator Forest Bright and media arts students Lillian Burke, Charlotte Norman, David Blakeslee, Odette Chavez-Mayo and Ellie Burck spent two days filming outside the convention, interviewing attendees and trying to reach a place of understanding. By turns silly and strange, the documentary is a mirror of the U.S., and democracy, in the present moment.

The film will be screened at 8 p.m. in room 219 of the Art and Science Building at Antioch College. Click here to read a full story on the film crew’s experience.