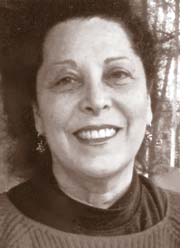 Born Jan. 14, 1949, Jude was the daughter of Louis and Shulamith (Burstein) Filler. A world traveler, connoisseur and cook, gardener, book and movie lover, spiritual seeker, animal lover, and tireless advocate for the poor and marginalized, she made a positive difference in many lives.

Jude was raised in Yellow Springs, spent some high school years in Israel and graduated from Antioch College. She traveled in Latin America and was an ESL professor in Brazil. After marrying, she earned an MBA at Simmons College in Boston, worked in New York as an executive for CBS and American Airlines and moved to Dallas, Texas. There she found her calling organizing for social change as a volunteer for Amnesty International. She moved to Austin to become executive director of a coalition of grassroots groups working for social justice, and served as Amnesty’s state coordinator against the death penalty.

After she was diagnosed with a rare cancer, managing treatments took up much of her energy. Yet she took on new activities, enjoying a rich Quaker life, running an online bookstore and a bed-and-breakfast, organizing cancer support groups and teaching English in Spain.

In lieu of flowers, please consider memorial contributions to the Carcinoid Cancer Foundation, http://www.carcinoid.org, 333 Mamaroneck Ave. #492, White Plains, NY 10605 or any organization that works to end the death penalty.