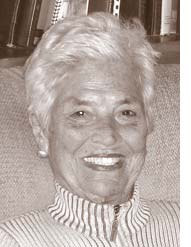 Martha “Jean” Marsh died at home July 11 after a brief illness. She had just celebrated her 92nd birthday.

She was the only child of Eleanor (Littleton) and Harold Schmidt of Springfield, Ohio. Although Jean grew up in Springfield and graduated from Springfield South, she spent much of her early childhood in Yellow Springs in the home of her maternal grandmother, Josephine (Hutchinson) and Earl Littleton, who was the town’s funeral home director.

Jean attended several semesters at Wittenberg University before taking a job as a cashier at the post exchange, or PX, at Wright-Patterson Air Force Base. It was here that she was to have a brief, but noteworthy “brush with fame” (although at the time, she did not know). As the story goes, one day in July of 1943, she was helping a young sergeant at the checkout counter who presented a personal paycheck to pay for his items, which was against store policy. As he was left with no other means to pay, Jean took pity on him and asked her employer to make a special exception and allow him to use the paycheck. The exception was granted; however, Jean was told that if the check turned out not to be good that the money would have to come out of her own pocket. The grateful sergeant later wrote Jean a letter thanking her for her kindness and understanding that morning at the PX. Years later 1n 1951 that same sergeant authored the book “The Catcher in the Rye,” which became an integral part of academic literature curriculum. To date, the book has sold more than 65 million copies.

Jean was a stunningly beautiful woman, and modeled for local photographer Axel Bahnsen for several years. One of her photographs, entitled “The Power of Suggestion,” appears in “Photographs by Axel Bahnsen,” published by the Yellow Springs Historical Society. The same picture hangs on the wall of a furniture store on Dayton Street.

It was no wonder that she caught the eye of a handsome Antioch graduate by the name of Lawson one afternoon while both were enjoying Sunday dinner at the Antioch Inn. Somehow the two were introduced and would later marry and live the rest of their lives together in Yellow Springs. Jean was a devoted wife and mother and dedicated her life to being the best at both. She loved to entertain and was an excellent cook and thoroughly enjoyed being the life of the party. She took pride in keeping a meticulously clean and orderly house, as did many women of her generation. Seldom was she ever seen without her earrings, coordinated, stylish clothing and bright red lipstick — she always looked her best. She was smart and possessed a great sense of humor and quick wit. She worshiped the sun and spent most of her summers with her children at the Gaunt Park swimming pool. Although Jean was terrified of the water and never learned to swim as the result of a near drowning accident as a child, she somehow taught both of her children to swim and enjoy what she never did. Among her favorite pastimes were sunbathing in the back yard and mowing the lawn. She loved the latter so much so that for her 89th birthday she asked for a new lawnmower with a pushbutton starter when she and Dad became too “mobility challenged” to pull the starter cord on the old one.

We were never as proud of our mother as we were in those final months as she contended with her illness and impending death. Always true to her role as a mother first, she remained strong for her children and managed to keep her sense of humor until the end of her life. She is greatly missed.

She was preceded in death by the love of her life, Lawson “Bud” Marsh in 2014, and is survived by her son, Steve, and daughter, Dana, and faithful dog, Buddy. Our family would like to extend our heartfelt gratitude to the many friends and neighbors who were friends of Jean and Bud and helped ensure their happiness and well-being as they aged.

Donations in Jean’s memory may be made to Hospice of Dayton, the Tecumseh Land Trust or the Yellow Springs Community Foundation.