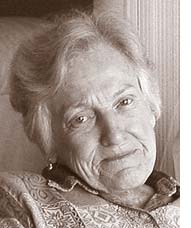 Phyllis was born on June 20, 1922, in Bellevue, Ohio, to Adrian Milton and Gladys Marie (Kleckner) Decker. She graduated from York High School in Sandusky County in 1940, and attended Baldwin Wallace College and the University of Michigan, where she earned a BA in sociology in 1944.

Phyllis married Howard Storer Smith on Oct. 14, 1944, and had been married for over 70 years at the time of his passing in 2015. Phyllis and Howard settled in Yellow Springs in 1945 and lived there until moving to Fairborn after Howard retired from his veterinary practice in 1985. In 2014, she moved to Brookdale Oakwood, where she resided until her death. Phyllis and Howard spent more than 35 years wintering in Ft. Myers Beach, Fla., and enjoyed traveling to many parts of the world over several decades.

A 70-year member of First Presbyterian Church in Yellow Springs, Phyllis enjoyed serving for many years as a Deacon. She was an avid reader and a longtime member of the Yellow Springs Senior Center, where she served as a volunteer driver.