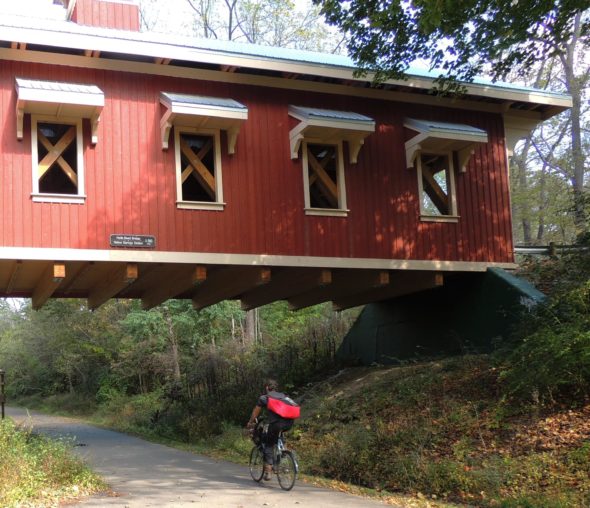 The local portion of the Little Miami Scenic Trail turned 25 this fall. The 10.2 miles of paved trail from Xenia to Yellow Springs was dedicated on Sept. 13, 1991, at the Xenia Station. Another ribbon-cutting was held the following month in Yellow Springs.

The trail was created on the bed of the old Little Miami Railroad (later the Penn Central Railroad) that once connected communities from Cincinnati to Springfield. Today’s Little Miami Scenic Trail follows that route, and once again connects people and communities along the Little Miami River in southwestern Ohio.

The local bikeway “didn’t just happen,” said Connie Crockett, a former Village Council member who strongly supported the project. Many villagers worked hard to bring the trail into being, while other villagers opposed the idea. But in the end, the trail was built, and today the local bikepath is widely used and loved.

This Saturday, Oct. 15, at 11 a.m., villagers involved in the trail’s past and present will gather at the Yellow Springs Train Station to mark the 25th anniversary by sharing trail history and reflecting on the bikeway’s impact. The event is free and open to the public.

Speaking at the celebration will be founding Governor Bob Taft, Eric Oberg of the Rails-to-Trails Conservancy, Dan Young of Young’s Dairy and others. Two champions of the trail will be honored: Ed Dressler, former head of Greene County Parks and Trails, and Marcia Sauer, bicycling enthusiast and owner of the Village Cyclery.

Read a more in-depth story on the trail’s anniversary in the Oct. 20 issue of the News.