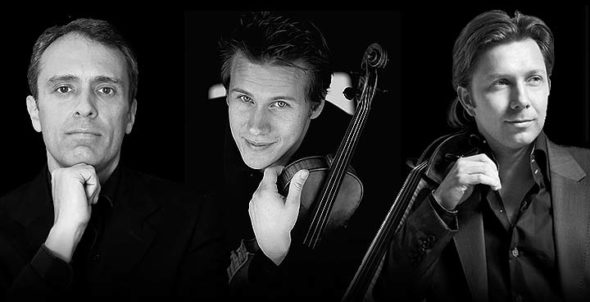 The David Piano Trio will perform at CMYS on Sunday, Oct. 23. (Submitted Photo)

The David Trio hails from Italy and will join us in Yellow Springs on Sunday, Oct. 23, for the second concert in the Chamber Music in Yellow Springs 2016–17 season. Composed of Claudio Trovajoli on piano, Andrej Bielow on violin and David Cohen on cello, this ensemble won first prize in the CMYS Annual Competition for Emerging Professional Ensembles in 2005. Invited to the “season of winners” last year, the David had visa problems and had to bow out of their engagement.

The David Trio plays an intense concert schedule, with performances in Italy, across Europe and in South America, including some of the best concert halls, such as London’s Wigmore Hall and the Concertgebouw in Amsterdam. They have also recorded with both the Altara and Stradivarius labels, including the complete Schubert trios. This recording has been praised as one of the best interpretations of Schubert. In 2016, they will release the complete Brahms Trios as well as the Piano Trio No. 1 in D minor, Op. 32 by Anton Arensky.

Their concert takes place at First Presbyterian Church in Yellow Springs at 7:30 p.m. They will play Arensky’s Op. 32, Schubert’s “Notturno” and Tchaikovsky’s Piano Trio in A minor, Op. 50. The story goes that Tchaikovsky’s patroness, Nadezhda von Meck, complained to him in a letter in October 1880: “Why have you not written a single trio? I regret this every day because every day they play me a trio, and I always sigh because you have not composed a single one.” The following spring Tchaikovsky did write this trio, “In Memory of a Great Artist,” in honor of the pianist Nikolai Rubinstein, who died in 1881 in Paris.

A pre-concert lecture to help familiarize audiences with the music begins at 6:45 p.m., and patrons are encouraged to be seated no later than 7:15 p.m. Short season tickets will be sold for only $80 (to include three more concerts in 2017). Individual concert tickets are $25 and $7 (full-time students) and are available on the Web or at the door. A post-concert dinner with the musicians is planned; reservations are required at least four days in advance, and may be made at 374-8800. All are welcome with a $20 donation. Tickets and more information about this concert and the rest of the season can be found at cmys.org. See also the group’s website at http://www.davidtrio.com .