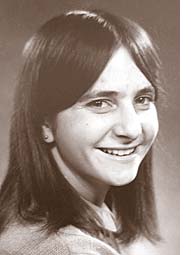 Rebecca Ann “Belle” Bush, age 67, died Wednesday, Sept. 21, at her home in Las Vegas, Nev. Born on March 15, 1949, she was the daughter of the late Meinhard and Beatrice Robinow, of Yellow Springs.

Rebecca is survived by son George (Katrina) Bush, of Athens, Ohio; son Clayton (Susy) Bush, of Las Vegas; and brothers David (Pat) Robinow and Dan (Denise) Robinow, both of Yellow Springs. Becoming a grandmother to George and Katrina’s young son Tyson brought Rebecca tremendous joy in the last years of her life. She is mourned by long-time companion and desert co-adventurer, Dan Dagnes; former husband Mike Bush; and an abundance of friends around the world.

Rebecca grew up in Yellow Springs, attending the Antioch School and graduating from Yellow Springs High School in 1967. She was known for her irreverent humor and her devotion to a wide circle of friends.

Rebecca attended Rockford College and graduated from University of Denver in 1972. She worked for a number of Dayton social service agencies dealing with the mentally ill and was highly sought after as a survey interviewer.

Rebecca embraced her last decade in Nevada, developing a passion for photographing desert flora and fauna and became a guardian of Native American caves in the Mojave Desert. Rebecca was a connoisseur of yard sales, spending many happy hours collecting and appreciating an assortment of ephemera. An avid cook, she hosted a fun cooking show on the Dayton Access channel and later enjoyed photographing the many dining options available around Las Vegas. She loved mushroom hunting, playing computer games and sharing Christmas cookies. She delighted in a series of birds, iguanas and small dogs.

The family anticipates a celebration of Rebecca’s life in her beloved desert at a later date.