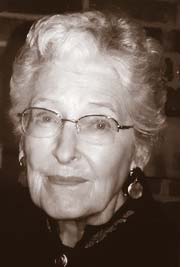 Thelma Berley, 96, of Yellow Springs, died on Oct. 1, 2016. She was born in New Burlington, Ohio — a town razed in the mid-’70s by the U.S. Army Corps of Engineers to build Caesar Creek — on March 11, 1920, to George and Anna Fletcher. Thelma and her parents moved to Yellow Springs in 1928. Although a lifetime resident of Yellow Springs from that time forward, Thelma spent all her childhood summers with her great-aunt who lived in the Ohio River town of Madison, Ind.

Thelma was voted Miss Yellow Springs in 1936 and was president of the Bryan High School Class of 1937. She attended Antioch College where she met “the love of her life,” Harry Berley. They were married on Dec. 1, 1938, in her parents’ home at 330 Elm St. in Yellow Springs. She dropped out of Antioch to support her husband through Northwestern Medical School in Chicago. After her husband completed medical school, he served in the U.S. Army. Thelma and her first two children moved to Nuremberg, Germany, to join him in 1946. In 1947, they returned to Yellow Springs in 1949 and built their family home at 1201 Livermore St., where they raised their three children. They continued to reside there until September 2008, when they moved into the Friends Care Community.

Thelma was an avid duplicate bridge player earning her bronze Life Master’s in 1987. She was also a member of a Tuesday night contract bridge group that spanned more than 60 years. She enjoyed bridge, golf, reading and cooking. Her husband often said he regularly dined at the best restaurant in Yellow Springs, and she gifted subscriptions to Bon Appetit and other cooking magazines to her daughter and granddaughters in hopes of passing on her gourmet cooking talents and interest.  Thelma was always quick to laugh and had a sharp sense of humor and a positive outlook on life, even into her 90s.

Thelma was preceded in death by her beloved husband of 70 years and her eldest son, Douglas Berley. She is survived by her children Carolyn Smith (Curt Nelson), of Xenia, and Bruce Berley, of Acton, Mass.; four grandchildren, Joshua Smith (Lisa Varandani), of Yellow Springs, Jennifer Smith, of Washington, D.C., Steven Berley (Kelley, of La Grande, Ore.) and =and nine great-grandchildren, three great-great-grandchildren and numerous nieces and nephews. Thelma was a devoted wife, mother and grandmother and will be greatly missed by all who survive her.

A celebration of her life will be held at the Antioch College Herndon Gallery on Sunday, Oct. 16, from 2 to 4 p.m. In lieu of flowers, the family requests that memorial contributions be sent to the Yellow Springs Community Foundation or Antioch College. Condolences may be sent to the family at 2584 Ridge Road, Xenia, OH 45385, or http://www.conroyfh.com.