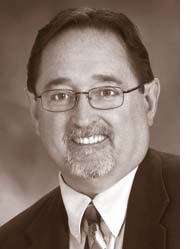 James Arden McCuddy passed away on Nov. 8 at Essex Nursing Home in Springfield, Ohio, after a prolonged illness.

Jim was born on the Fourth of July, 1952, in Springfield, the son of the late Bill and Melva McCuddy. He attended Yellow Springs High School and graduated in the class of 1970. He received a Bachelor of Arts degree in 1991 from Antioch University with a major in management and a minor in human development. He was a businessman with 20 years of experience in credit and collections management before becoming a realtor in Springfield.

In spite of having to struggle with chronic illness for his whole life, Jim was very active and enjoyed fishing, boating, golf and, most of all, his children and grandchildren. His sense of humor was legendary.

Jim is survived by his brother Bill and his sister Jane Ellen (Culligan), his son Jimmy, his daughter Caitlin, his stepson Erik Castle, his grandchildren Ty and Tori, nephews Will McCuddy and Joseph and Evan Culligan, nieces Michaela McCuddy and Megan Culligan and grand-nephew Liam McCuddy. He was preceded in death by his mother, Melva, earlier this summer.

A family remembrance for both Jim and Melva will be held later next year.